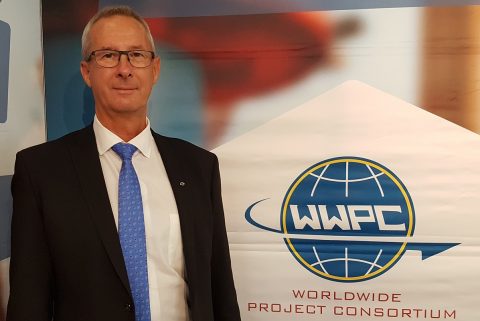 “We boost awareness about our members to customers worldwide”

The Worldwide Project Consortium (WWPC) is celebrating its 20th birthday this year. PCJ caught up with network company director Wolfgang Karau to talk about how it all started, what’s next and the current state of the industry.

Congratulations with the 20th anniversary. First, can you tell how it all started? Why and how was the consortium founded and how many members did you start with initially?

“The idea of creating a project logistics consortium first came to mind in 1998 during the construction of a new airport in Hong Kong. It was a large project involving many heavy and oversized shipments, for which one of the founders, Stewart Murdoch, worked together with two other project logistics experts. The combination of companies worked really well and at that time, there weren’t any forwarders yet who specifically targeted the project cargo and heavy-lift industry, so in 2000 the network was registered as Worldwide Project Consortium. At the first meeting in Brussels in 2001, there instantly were 40 companies who wanted to join the network.”

As the owner of a project logistics company yourself, how did you get involved in the consortium?

“I was approached in 2000 to join the consortium to expand the network’s coverage with local expertise in Finland where my company, Procargo, is based. Together with Silberburn Shipping Group’s director Nikolay Baranov and commercial manager Jonathan Townley, I had just completed a high-profile contract moving the Russian space shuttle BURAN for the first time. The project got a lot of media coverage as the space shuttle had to be moved over water from the Zhukovsky airport near Moscow to Gothenburg in Sweden, passing both the Kremlin on the Moscow River and the canals to St.Petersburg before reaching the Baltic Sea. I was asked to become a director of of the consortium, a role I gladly accepted.”

What is the role of the consortium today? Do you also act as a booking agent?

“Our role is to boost awareness about our members to customers worldwide. Our backbone is formed by small and middle-sized companies which we help with their marketing. We organize meetings and events, act as a global business directory for project logistics and write and distribute press releases about their projects. We are not involved in day-to-day trading but our members trade a lot among each other. What makes us different from the other organizations is our country exclusive membership. After WWPC started a lot of similar organisations came along. We had our members vote on how they wanted the network to be formed and the result of that was a country exclusive membership model. Nowadays, only one company per country or region can join the consortium. That way we provide a lot more value to our members.”

Looking at you geographical coverage, are there any specific areas left where you want to expand?

“Our network is always looking for viable companies in countries not represented yet.”

The consortium consists solely of logistics providers. Why aren’t there any transport companies?

“We thought about that but it could hurt the flexibility of our members. Instead, we often invite shipping companies and airlines to our events where they can present their companies and build relationships with our members. We do operate two other networks as well, called Cargo Equipment Experts, which members provide equipment to move project cargo, and the Priority Cargo Network, which focuses on freight forwarders, and we promote cross-collaboration among these networks.”

The project cargo industry has been through some rough years following the crude price crash in 2014 but analysts are becoming optimistic again. As an industry veteran, how would you say describe the current state of the market?

“When the Worldwide Project Consortium was registered in 2000 the world of project cargo was extremely different from what we see today. There was much more heavy and outsized cargo available to be moved to increasing numbers of industrial project sites. Since 2008, however, the market has become a lot more difficult. What I personally see is that there is simply not enough cargo to feed everyone anymore and this has been ongoing for 10 years. You don’t hear much negativity from the shipping companies but with the new sulphur rules now in effect, it might get worse. I don’t have a crystal ball, and really am no wiser than you, but I feel we will still have to wait a little longer for demand to pick up.”

So what does the next decade hold for the consortium?

“I think it will depend on how the markets develop. Most of our members are family companies with a strong regional position and as such, have been impacted less by international movements. As for WWPC, we will continue to represent our members in the best possible way.”