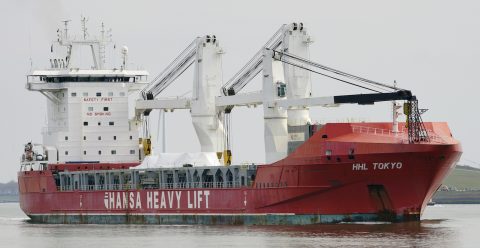 Spliethoff has acquired the former Zeamarine heavy-lift vessel Zea Gold. The ship is currently in Rotterdam for maintenance and will depart for its next project in May carrying a new name, the MV Palmgracht.

The Palmgracht is a 19,450 dwt heavy-lift vessel with a combined crane capacity of 1,400 tonnes and has previously also operated in the fleets of Beluga Shipping and Hansa Heavy Lift.

In February, the vessel, then still named Zea Gold, made headlines as it was arrested in Rouen on behalf of Nomadic Shipping. Zeamarine had reportedly stopped paying fees for two multipurpose vessels it had chartered from the Norwegian shipping company, the Nomadic Hjellestad and the Nomadic Milde.

With the addition of the vessel, Spliethoff now owns and operates eight P-Type vessels; three P8-Type vessels (20,100 dwt/800 tonnes maximum lift) and five P14-Type vessels. The ship has been reflagged and now operates under the Dutch flag.

The Spliethoff Group operates a total of over 70 multipurpose and heavy-lift vessels which are operated in close cooperation between dry cargo specialist Spliethoff and heavy transport operator BigLift Shipping, a subsidiary of the company.

The picture above shows the P14-Type vessel HHL Tokyo, an identical vessel which Spliethoff purchased last year in the wake of Hansa Heavy Lift’s bankruptcy. This vessel now operates in Spliethoff’s fleet under the name Paleisgracht. The Palmgracht previously operated in Hansa Heavy’s fleet as the HHL Valparaiso.