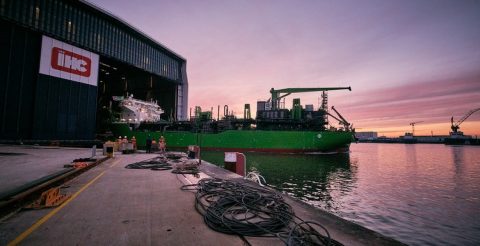 The owners of Van Oord, Boskalis, DEME and Huisman Equipment have teamed up with the Dutch government to keep shipyard Royal IHC from falling into Chinese hands. The Dutch shipyard and its expertise in complex vessels are deemed too important to lose.

Royal IHC specializes in complex vessels and vessel systems. Traditionally, the company has a strong focus on the dredging market but it handles a lot of offshore vessels as well. It is often referred to as the Silicon Valley of shipbuilding as for many years, the shipyard has had a leading role in maritime innovation. The shipbuilder also is of crucial importance for the many maritime suppliers in the region.

It is for that reason, the Dutch government and its major clients wanted to prevent the financially struggling shipyard from falling into Chinese hands.

The shipbuilder got into financial trouble long before the outbreak of Covid-19. It struggled with lower demand from the offshore sector and cost overruns on some major projects, including contracts with DEME. As a result, the company has been loss-making for years and this sparked concerns about a possible takeover by Chinese companies which may be interested in Royal IHC’s expertise.

To prevent this from happening, the shipbuilder has now been taken over by a consortium of HAL Investments, Ackermans & van Haaren, MerweOord and Huisman. HAL Investments is a large maritime investment company and the majority shareholder of Boskalis. MerweOord is the investment company of the Van Oord family which owns the eponymous Dutch offshore and dredging company. Ackermans & van Haaren is a Belgian investment company and the majority shareholder of DEME. And Huisman Equipment is the well-known Dutch offshore crane manufacturer.

By establishing a continuity foundation which will hold the shares in IHC Merwede Holding, “the consortium aims to retain for the Netherlands both Royal IHC’s leading technology and its position as an important hub in the maritime cluster”, the companies state.

The rescue mission of the four companies is supported by the Dutch government, which is contributing about EUR 400 million. The State itself is a major creditor of IHC, so trying to save IHC is also a way to minimise losses on outstanding amounts as much as possible.

The state aid comes with several terms and conditions. One is that “the private parties involved in IHC should make an effort similar to that of the State”, the Dutch Minister of Economic Affairs and Climate Eric Wiebes writes in a letter to parliament.

New board of directors

Following the agreement, Gerben Eggink has been appointed as the new interim CEO. He succeeds Dave Vander Heyde and will lead Royal IHC through this new phase.

“I am looking forward to working hard with colleagues to restore the profitability of the business while maintaining our high quality and the satisfaction of our customers for the solutions Royal IHC delivers. That will require a major effort from everyone, especially in these difficult times worldwide. But Royal IHC is more than worth it”, Eggink says.