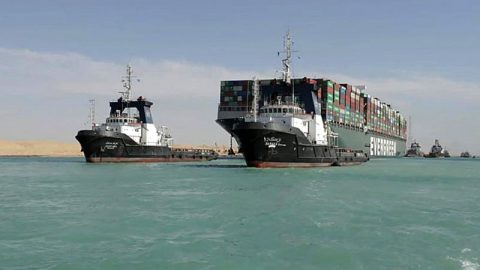 Ships are queueing through the Suez Canal

A day after Boskalis subsidiary Smit Salvage pulled the container ship Ever Given free, enormous container ships and tankers are once again sailing in large convoys through the Suez Canal in both directions. The Ever Given appears to have suffered some damage to its bow and is currently still at anchor in the Great Bitter Lake.

The number of ships waiting had risen to about 450 on Monday, with around fifty joining the queue every day. The Suez Canal Authority (SCA), hopes to clear the backlog in three and a half days, but it remains to be seen whether this will be possible. Earlier, Maersk calculated that a maximum of 85 ships can pass through the canal in 24 hours and that it will probably take six days to resolve the situation.

On Tuesday morning, AIS data shows that dozens of ships passed through the canal in both directions. As is well known, the Suez Canal is sailed in both directions in convoys, because a large part is not wide enough to allow ships to pass. That happens on the Great Bitter Lake, which is part of the link.

Initially, the SCA seemed to give priority to large container ships, especially in the northern direction. From Suez on the south side of the canal, large oil and gas tankers were later admitted to the canal. Around noon more than thirty ships were waiting on the Great Bitter Lake to pass each other. North of this lake, however, it is possible to sail in two directions at the same time on most of the route.

The Ever Given is still at anchor on the Great Bitter Lake. Contrary to what Evergreen reported after the beaching, the front of the ship is damaged, but probably not to the extent that it cannot sail under its own power. Water entered the ship through a bow thruster’s propeller tunnel. The tunnel has now been sealed from the inside.

Insiders assume that the Suez Canal Authority has detained the ship and that it will not be allowed to leave until the shipping company has provided sufficient bank guarantees. This is usual practice in this kind of situation. It assures the port or waterway authority that all costs incurred will be reimbursed and that future claims can be successfully recovered from the shipowner.

It is expected that shipping companies and shippers affected by the delay will submit massive claims to the owner of the Ever Given for compensation of the damages suffered, insofar as these are not covered by insurers. It is possible that the Suez Canal Authority will also file a claim for compensation of lost toll income. Legal experts expect claims to run into hundreds of millions. What is certain is that the financial settlement of the most serious blockage of the Suez Canal in more than half a century will take years.

This article first appeared in Dutch on Nieuwsblad Transport, a sister publication of PCJ.