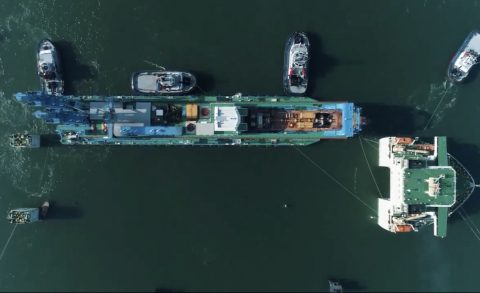 The new cutter suction dredger Mohab Mameesh has arrived in Egypt after it was transported by the semi-submersible vessel Xiang Rui Kou from Rotterdam. The shipyard that built the 29,190-kW heavy-duty dredger has released a video of the loading operation.

The Mohab Mameesh is one of the most powerful dredgers in the world and was built by Royal IHC for the Suez Canal Authority (SCA). The dredger had already officially been handed over to the SCA on 18 March. The 147.4-metre-long dredger with a total installed cutter power of 4800 kW will primarily be deployed to maintain and improve the Suez Canal, which connects the Mediterranean and Red seas.

To get to Egypt, the ship was loaded onto the semi-submersible Xiang Rui Kou. This heavy load carrier was built in 2011 and sails under the flag of China. Its carrying capacity is 48,293 t DWT and its length overall (LOA) is 216.7 metres with a width of 43 metres.

Watch a video of the dredger being loaded onto the semi-submersible and leaving the port of Rotterdam below.