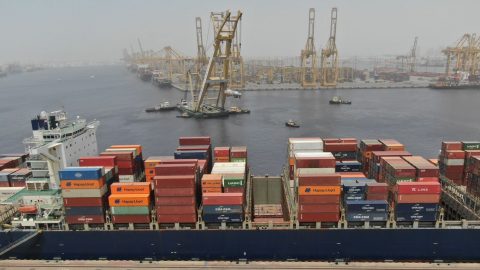 French shipping giant CMA CGM has completed a number of milestones in the breakbulk segment using its fleet of containerships.

Stéphane Berninet, the head of CMA CGM’s project cargo division, noted that the unit is looking to test the limits when it comes to containerised project cargo.

Over the past weeks, the company performed the largest containerized project cargo in the Middle East waters. To remind, CMA CGM, in partnership with DP World handled and shipped four mega polyethylene reactors from the Jebel Ali port to Rotterdam. The cargo had an overall weight of 839 tons, with the largest weighting 227 tons, measuring 35 meters in length, 7 metres in height, and 7 metres in width.

The four reactors were transported over two shipments from Jebel Ali to Rotterdam, occupying 424 TEU slots.

Berninet added that this has worth been the very first time the company carried out out floating crane operations at the DP World container terminal.

In Italy, CMA CGM loaded four LNG engines of 160 tons each out of TMT – Trieste Marine Terminal, beating the record load (in weight) on a container ship in just one port of call in the whole of Mediterranean area.

However, Berninet noted that none of the shipments would have been possible without each stakeholder facilitating the planning in advance.