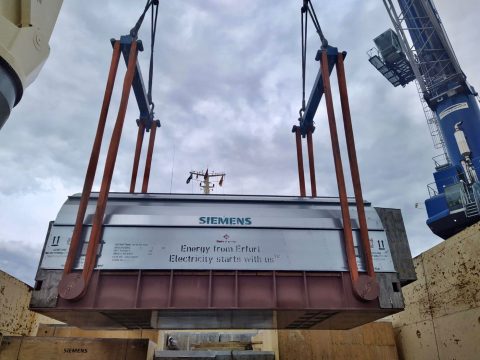 Equipment for the 671 MW simple cycle power plant for Tripoli West project in Libya is on the move. German freight forwarder DAKO Worldwide Transport has loaded the first project cargo shipment in Hamburg.

The Dusseldorf-based freight forwarder noted that the first shipment consists of 1850 freight tons. The company loaded two turbines and two generators ranging between 183 and 221 tons.

The company has been entrusted to handle the equipment for the power plant project. According to the company’s brief statement on social media, this also means additional equipment will have to be transported from various locations. Locations include China, Indonesia and a second shipment from Hamburg.

The delivery is being handled in partnership with Wallman & Co. and SAL Heavy Lift, which ensured efficient pre-planning and execution.

Siemens has signed an additional deal with the state-owned utility General Electricity Company of Libya (GECOL) which will boost the company’s installed power under the two deals to 1.3 gigawatts (GW).

In addition to the Tripoli West project, Siemens will build a 650 MW open cycle power plant in Misrata, equipped with two F-class gas turbines. The total volume of EPC contracts, including long-term service agreements, is in the range of €700 million, Siemens said.