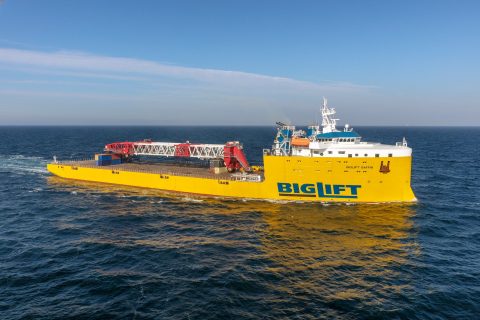 The first shipment, the A-frame, of 36.22*27.5*14.35 metres, and the slewing column, of 1,775 mt, with auxiliary items, were transported by BigLift Barentsz. These pieces had originally been designated for one of Spliethoff’s P-type vessels. However, the requirements for the slewing column required such standards, maximum deflection of the deck of 5 mm, that it was decided to schedule BigLift Barentsz for this particular shipment.

The second part of this cargo involved only the 796 mt boom, which measures 82*19.5*13.4 metres. BigLift Baffin was the logical choice there; she was available at the right moment and was due for Asia anyway, BigLift said.

All pieces were loaded at the Liebherr Facility in Rostock, Germany, and after a safe sea voyage, delivered to China Merchants Heavy Industry (CMHI).

With the completion of crane part deliveries, OHT’s Alfa Lift is nearing its completion, scheduled for the delivery at the end of this year or early 2022. The vessel was launched at CMHI at the end of February this year.

The boom was delivered closely after the installation of the A-frame and the slewing column was finalised. This market the completion of Liebherr’s heavy lift crane HLC 150000. With a maximum lifting capacity of 3,000 tonnes at 30 metres and 1,000 tonnes at 76 metres outreach, the HLC 150000 is ready for a wide range of applications.

In 2022, the HLC 150000 onboard Alfa Lift will start operating in the North Sea. The first project is the construction of the wind farm Dogger Bank A, about 130 kilometres off the north-east coast of England.