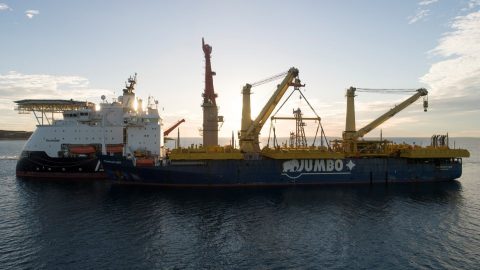 Jumbo-SAL-Alliance was contracted for a transshipment job for TechnipFMC, a contractor for the Chevron-led Gorgon stage two development, located offshore Western Australia in water depths ranging from 250 to 1,340 meters.

In a brief statement through its social media channels, Jumbo-SAL-Alliance informed it transported three pairs of manifold structures and various other equipment and transferred it onto the Allseas’ OCV Fortitude for subsea installation.

The project involved the installation of subsea manifolds to accommodate new wells, infield flowlines and umbilicals to tie into the existing subsea infrastructure in the Chevron-operated Gorgon and Jansz-Io fields.

TechnipFMC has been awarded a subsea installation contract by Chevron Australia, for the Gorgon stage two development in July 2018.

Jumbo-SAL-Alliance was able to deliver the cargo in one go using its J-Class vessel, the Fairpartner, with 1,800t combined lift capacity cranes and 3,100sqm free deck space. The fact that the Fairpartner was able to carry all cargo in a single voyage and transfer it to the OCV in various sequences was essential to this time-sensitive job. This flexibility was needed to optimise the client’s installation schedule for weather conditions.

In addition, Jumbo-SAL-Alliance took care of the engineering and fabrication of the grillages and seafastening. The transfer was completed without issues through good cooperation with the crew on the Fortitude.

Gorgon stage two is part of the original development plan for Gorgon and includes the expansion of the subsea gas gathering network required to maintain long-term natural gas supply to the 15.6 million tonne per annum (MTPA) LNG plant and domestic gas plant on Barrow Island.

A modification of the existing Gorgon development, J-IC will involve the construction and installation of a 27,000-tonne normally unattended floating Field Control Station (FCS), approximately 6,500 tonnes of subsea compression infrastructure and a 135km submarine power cable linked to Barrow Island.

Construction and installation activities are estimated to take approximately five years to complete.

J-IC follows the Gorgon stage two project, which is nearing completion of the installation phase, to supply gas to the Gorgon plant from four new Jansz-Io and seven new Gorgon wells.