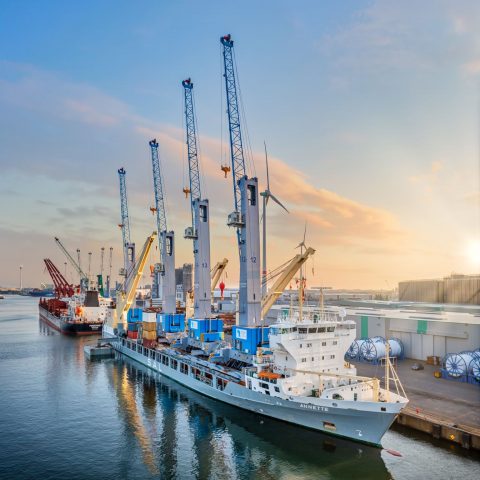 Jumbo-SAL-Alliance has booked another job with the lifting solutions specialist Konecranes to transport four of its cranes from Europe to Africa.

Jumbo-SAL-Alliance vessel to make stops in Nigeria and Cameroon

The company also noted that a total of 157,262 cubic meters of cargo were loaded on the deck of the type 161B, HLV Annette. The vessel will deliver the units to Lagos, Nigeria and Douala, Cameroon.

According to the AIS data, the vessel has already arrived in Nigeria and is currently moored at the Tincan Island Container Terminal, Lagos, Nigeria.

Tincan Island Container Terminal Limited (TICT) booked the order for two Konecranes Gottwald Model 7 mobile harbor cranes in January this year. TICT, a unit of Bolloré Transport & Logistics (Bolloré), the largest transport and logistics operator in Africa, placed the order in anticipation of expanded container traffic in 2021 and beyond.

The new cranes will be operated by TICT in the Tincan area of the Port of Lagos, where they will handle containers alongside a fleet comprising of six Model 4, two Model 6 and two other Model 7 Konecranes Gottwald Mobile Harbor Cranes already on-site. The new units will allow TICT to accommodate larger vessels.

Anticipating an increase in the volume of cargo passing through the Port of Douala, RTC decided to add to the fleet of mobile harbor cranes at their terminal. They ordered two Konecranes Gottwald Model 6 cranes as this equipment will provide them with more cargo handling capacity and help them raise their terminal, which handles the majority of Cameroonian port traffic, to a new level of efficiency.