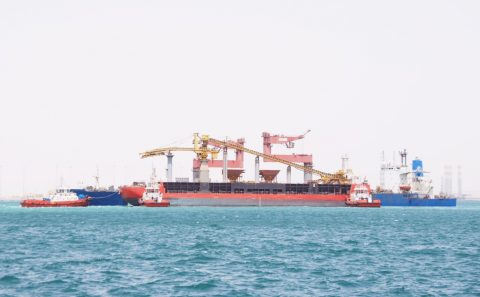 GAC ships a cargo ship from Port of Duqm

GAC Oman completed a loading of an 8,000-tonne cargo vessel aboard a heavy lift vessel for subsequent transport to West Africa. The 114.5m long cargo vessel had been laid up at the Omani port of Duqm.

With GAC Oman as its agent, the float-on method was used to get it aboard the heavy lift vessel (HLV) that would take it to its destination. It took nearly 12 hours to prepare the HLV, getting it into its loading position and pre-submerging it to freeboard, with a tug used to secure it at its stern.

The cargo ship was then towed to the HLV and connected with heaving lines, as the larger vessel submerged until it reached loading draft and the final loading position. The HLV then de-ballasted and headed to the cargo berth for sea fastening and marine warranty survey.

While GAC Oman did not unveil the name of either of the vessels, AIS data shows that the semi submersible heavy lift vessel Development Way, departed the Port of Duqm on July 28, and is currently sailing in the Red Sea. The data is showing the vessel’s final destination to be Sierra Leone’s capital Freetown.

GAC Oman’s business manager, Sivasankar Kushal, says it was a complex operation which took careful advance planning by the GAC team, “We had multiple operations planning meetings with the vessel, port authority and other stake holders. It was a precise operation with no room for error, so every move was a carefully calculated one.”

Eid holidays and four days of nationwide lockdown that coincided with planned departure added to the challenge, as approval for the operation had to be obtained from the authorities for the operation, and movement of GAC personnel during the lockdown to make it happen.