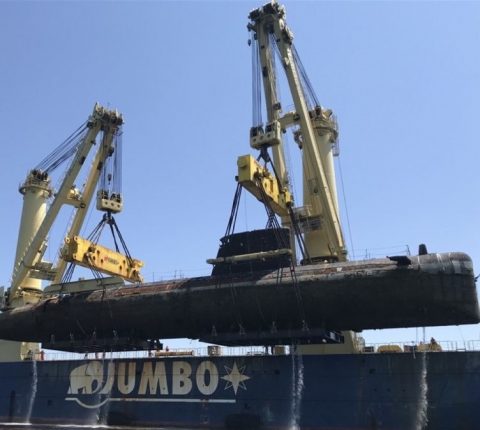 Jumbo-SAL-Alliance has ben contracted to load a submerged Q739 submarine in Toulon for shipment to Brest. The operation has been sanctioned by Navaleo, the French naval and industrial deconstruction specialist.

Jumbo-SAL-Alliance deployed its heavy lift vessel, Jumbo Kinetic, to lift the submarine weighing 1280 tonnes in dual lift, directly from the water, and position it on its deck. Jumbo Kinetic is one of the two vessels from the K-class family. Fitted with two 1,500-tonne crane with a combined lift capacity of 3,000 tonnes.

Navaleo informed this is the third and last diesel submarine of the French Navy, that required a heavy lift and transport to Brest. According to the AIS data, Jumbo Kinetic has already arrived in Brest.

The delivery is part of Navaleo’s deconstruction contract for the three decommissioned submarines, Agosta, Bévéziers and La Praya. Jumbo Kinetic transported the Agosta, that served as a “shock box” for the French Ministry of Armed Forces measuring underwater explosion impact forces.