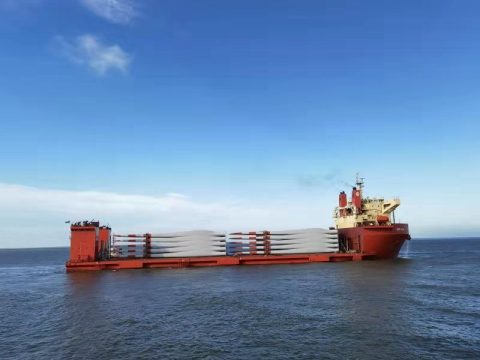 SAL Heavy Lift, part of the Jumbo-SAL-Alliance has pushed its own limits further with a new record. Acting as a commercial agent for PanOcean for European countries the company is transporting a total of 168 wind turbine blades from China to Europe.

The blades have been loaded in Dongzao onboard the semisubmersible vessel MV Sun Rise, built in 2012 by STX Dalian Shipbuilding. In a brief statement through its social media channels, SAL Heavy Lift informed the vessel faced adverse weather conditions on site in China because of a typhoon and local Covid-19 restrictions. According to the AIS data the vessel sailed off from China at the end of July and is currently in the Eastern China Sea, off Taiwan.

Its first stop will be the port of Antwerp in Belgium where the portion of this project cargo will be offloaded. Namely, SAL Heavy Lift said that 30 of the blades will be offloaded in Antwerp at the end of September. The remaining 138 blades with be discharged at Gdynia port, Poland.

Each blade measures about 55 m in length and weighs 9.6 tons, which makes the full load weigh upwards of 1,600 tons.