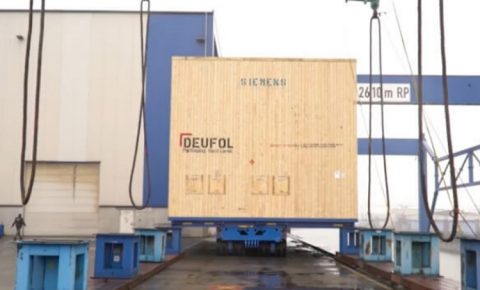 Deufol noted it was contacted by Siemens with a request to pack a huge installation in one piece. One of the largest and heaviest assets packaged by Deufol to date. A compressor weighing 251 tons had to be packed for sea transport to Korea.

The first step was to define the exact transport and packaging requirements together with Siemens and to plan the entire operation step by step. After careful planning, an expert team of packing professionals was sent to the Siemens site in Duisburg to carry out the packing operation on site.

Each step of the packaging process was planned, prepared and carried out in detail. Each part of the packaging was tailor-made. This was the only way to ensure that the compressor to be packed would arrive safely at its destination.

The first step was the assembly of a steel platform that formed the basis of the package. The 251 ton machine was then carefully placed and secured on the steel skid.

The steel skid and the machine were wrapped in protective VCI foil with additional VCI boost material to protect it from moisture and to prevent corrosion during transport and storage. All individual parts were also preserved in VCI foil.

The next step was the assembly of the wooden ISPM 15 certified box. The panels of the full wooden crate – made from ISPM 15 certified wood – were designed and produced in detail beforehand, and assembled on site into one large crate. This was done using cranes that positioned everything where the Deufol packers attached it to the steel base and to one another.

The box construction was strengthened with steel structures to prevent it from being damaged during lifting. The wooden cover was placed on top. An extra rainproof foil was applied on top of the box.

Transport to the quay and loading onto the vessel

After packing, inside the building, the enormous breakbulk case had to be taken to the quay of the port. To be shipped to the port of Antwerp by barge.

For this, the team used a modular transport system for heavy cargo. While the team followed every step of the way, the enormous crate was driven to the harbour quay.

There, it was loaded onto a barge using a floating crane and shipped to the port of Antwerp for final shipment to Korea.

I am a compressor lover.I am searching about compressor packing.I have found this article.It is very informative.I have a compressor blog I hope it will help your visitors to know about air compressor–https://compressorlab.com/