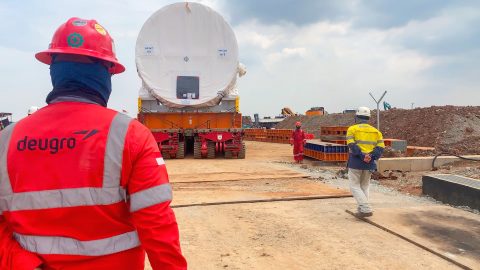 The project’s challenges included limitations at the site jetty in West Cilamaya, Java, which allowed only one barge to berth at a time, and the road from the port to the construction site, which led through several space-limited villages. Furthermore, space limitations for the HRSG module storage at the Port of Tanjung Priok, Jakarta, and a limited feasibility to transfer the gas turbine and gas turbine generators had to be considered. The biggest challenge in meeting the project’s schedule was to deliver the cargo safely and on time during various seasons with continuously changing weather conditions.

Based on a route survey, deugro Jakarta calculated the maximum transport dimensions and weight for the road freight and identified the units that could not be delivered by road but had to be transported by barge.

“The oversized and heavy lift cargo (OSHL) was discharged directly from the vessel onto the barges at the Port of Tanjung Priok. This led to massive cost and time savings, as well as risk mitigation, since double-handling, storage in the port and re-loading onto barges were avoided,” said Hagen Hennig, regional head of Transport Engineering APAC, dteq, Germany.

In line with this concept and the jetty’s limitation, a vessel arrival schedule was developed that matched the vessel sequence and arrival dates with barge and jetty availability to always have a barge ready upon vessel arrival, and at the same time to avoid barges lining up at the site jetty.

A particular challenge was the direct unloading operation of the 438-metric-ton gas turbine from the vessel directly onto the barge at the Port of Tanjung Priok, followed by the 100-nautical-mile voyage to the job site’s jetty in West Cilamaya and the on-carriage to the construction site. Precise planning, coordination and dteq’s sea fastening design, motion analysis and mooring calculations, which considered the location of subsea pipelines, were key to this successful project execution.

For the roll-off operation at the job-site jetty, the barge was moored, stern to the jetty, with four mooring lines and two lines as a backup. The ramp was placed on sandbags, distributing the loads evenly to the ground. The gas turbine was rolled off the barge using hydraulic axle lines provided by dhaulage, deugro group’s equipment owner. Supported by escorts, flagmen, spotters, and traffic management as per site requirements, the gas turbine traversed seven kilometres on the purpose-built road to the construction site. The staging drawings and swept path analysis for the delivery and on-site storage were provided by dteq.

Because the road from the jetty to the job site had a ground-bearing capacity of 4.8 metric tons, dteq’s transport engineers developed a transport solution that remained below this figure, while keeping the trailer configuration short enough to be able to navigate the purpose-built roadway.