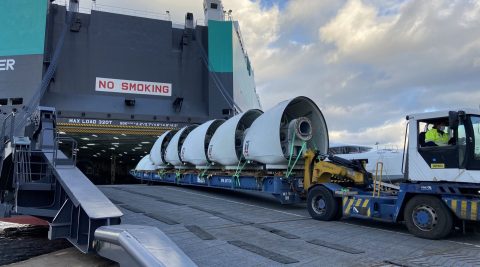 Wallenius ships windmills on its RoRo liner service to Australia

The shipper has been contracted by a.hartrodt, a German freight forwarding company, to complete the project for KSR Wind Solutions. The size of the structures was one of the obstacles faced by the company, but also the specific biosecurity regulations in Australia.

The windmills are destined to be deployed by Blair Fox, an electricity company that builds and operates wind farms in Western Australia where wind power makes up 37.5 percent of total renewable energy supply.

Wallenius Wilhelmsen initially used its trucks to deliver the components from the site to KSR Wind Solutions compound for survey. From there, the components were hauled to the terminal at Bremerhaven. At Bremerhaven, the company deployed roll trailers to load the windmill components onboard the Tannhauser, which is one of the company’s HERO vessels.

With five base/mid-section tower stacks, each weighing 51 tonnes and measuring 21.3 metres long; three top tower section stacks measuring 25 tonnes; and two blade stakes weighing up to 15 tonnes and 26.2 metres in length, the use of specialised handling equipment ensured minimal lifting to reduce the risk of damage to these high-value products.

Once onboard, underdeck stowage provided extra protection and ensured the products were kept safe from the environment.