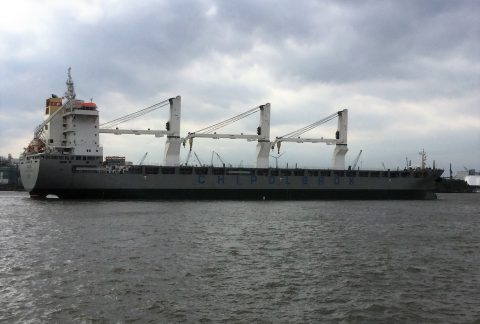 Chipolbrok Atlantic heads off on project cargo tour of Europe

Chipolbrok Atlantic, the heavy lift vessel owned by the Chinese-Polish joint stock shipping company, Chipolbrok, has recently set off on another voyage heading from China to multiple locations in Europe. The vessel loaded various types of cargo in Qingdao and Taicang and headed to Europe.

The route takes the vessel through the Suez Canal to Antwerp, Hamburg, Gdansk and St. Petersburg.

For Hamburg only a smaller portion of cargo like rotor houses of each 76 tons plus 800 tons of general cargo has been scheduled while the majority of cargo during this voyage goes to Gdansk in Poland. The portion to be discharged in Gdansk totals about 9,000 tons including 1,700 tons of food additives in big bags plus 6,400 tons of steel coils. The cargo also includes smaller lots of industrial equipment and machinery.

The last discharging port will be St. Petersburg for roughly 2,600 cubic meters of general cargo including two heavy pieces of 67 tons each. Chipolbrok added that despite the load totalling 24,000 tons, the vessel’s DWT capacity was not fully utilised.

The company’s next vessel to take on the voyage from Asia to Europe will be the Nowowiejski that will load cargo in the Korean port of Masan and the Chinese port of Taican. The vessel will then make port calls at Barcelona, Antwerp, Hamburg, Stockholm and Gdansk.