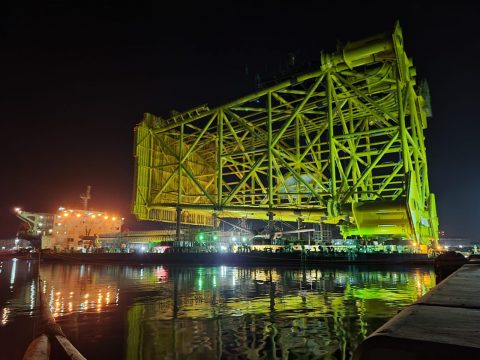 The job was completed with Petrofac and included the High Voltage Alternating Current (HVAC) offshore substation platform jacket and piles. The superstructure has been loaded at the Eversendai Offshore’s facility in the UAE onto the Dongbang Giant No: 8.

Manager special projects, Roel Wesel said, “This project signifies the steady growth of Roll Group with its land activities. Over the past two years Roll Group Middle East and Asia have seen a continuous increase of its capabilities by performing ever larger and heavier moves. The new milestone of 6,500 tonne puts Roll Group firmly on the map as land-based heavy lifting and heavy transport provider. With its combination of heavy transport vessels and land-based heavy lifting and transport equipment, Roll Group is able to provide complete in-house scopes from factory to foundation.”

Located 27 kilometres off the coast of Angus, once commissioned Seagreen will provide around 1.6 million homes with low carbon energy. The £3 billion ($4.1 billion) offshore wind farm is being developed by SSE Renewables (49 percent) and TotalEnergies (51 percent). First power is expected by early 2022 with the offshore wind farm expected to enter commercial operation in 2022/23.