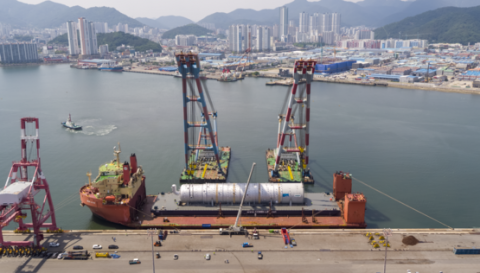 Linde Engineering recently delivered a quench tower weighing almost 1,500 tons to Russia for the Amur Gas Chemical Complex. To transport the world’s largest quench tower to date engineered with 80 metres in length and a diameter of 14 metres, Linde built a special barge for transport.

Linde is managing the Amur Gas Chemical Complex (GCC) project that will house the world’s largest steam cracker for ethane and LPG feedstocks. Mechanical completion of the site is scheduled for 2024.

Harald Schubert, senior project director at Linde Engineering, said, “We loaded up a key plant component – the quench tower – in Korea to send it on its journey to the construction site in eastern Siberia. This column plays a vital role in cooling and purifying the cracked gas.”

The sheer scale of the quench tower was not the only hurdle to be overcome. The shipping route, including a 2,200 kilometre stretch along Siberian rivers, was a test in itself.

“The rivers on this route are frozen over from mid-October to early May, and melting ice then clogs the mouth of the Amur River until early June, blocking passage. So our window of opportunity was only about 130 days,” outlines Matthias Pohlmann, logistics manager for the Linde project. “What’s more, we would only have a guaranteed water depth of 1.1 meters for the last 212 kilometres.”

The shipment would also need to pass under two bridges with a clearance of 11 to 16 metres, depending on the water level. To enable transport of the quench tower under these conditions, Linde built a special barge, which was launched in Shanghai in May. The column was then loaded onto the barge in Korea, to embark on its voyage to Russia. Towards the end of May, the convoy reached the Russian east coast and, in early June, the port of De Kastri for its final leg upstream towards Svobodny and the Amur GCC. On July 7, the plant component finally arrived at its destination.

The quench tower had to be delivered to the site at a very specific time. “Late delivery would disrupt the entire construction schedule and jeopardize timely commencement of operations, but too early could be a problem too – say if the foundations were not yet in place or cranes not available to erect the tower. There’s no space for temporary storage, so that then has to be rented at high cost, or you have equipment blocking the construction site,” said Schubert.

To avoid this kind of scenario, all work packages for engineering and procurement are delivered in the order work is carried out on the ground. This ultimately ensures that idle time, productivity losses and delays for construction crews caused by late deliveries are no longer an issue.

Breaking up the delivery into pieces

Like building a model from a kit, Linde’s experts keep the big picture in mind, breaking down the overall project into logical and manageable steps, or work packages – each of which then includes all the necessary components.

Advance planning pays off for highly modular projects, in particular, where construction phases must be tightly dovetailed. The effort is well worth it in the end, boosting on-site productivity by up to 25 percent.