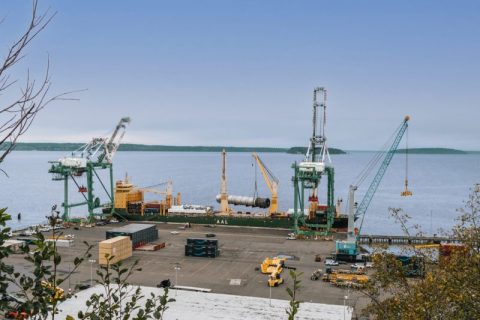 AAL delivers project cargo for a US petroleum refinery

Project heavy lift specialist AAL Shipping (AAL) has delivered 456 metric tonne industrial tower components for a petroleum refinery in the United States. The cargo was loaded in South Korea onboard the 31,000-deadweight heavy lift AAL Pusan and transported across the Pacific to the Port of Everett in Washington.

Project cargo was delivered via AAL’s ‘Asia – US Trade Route’ with the shipment facing obstacles with Covid-19 restrictions at a number of ports of call. Despite the restrictions, Felix Schoeller, commercial director of AAL notes that the trade route sailings are “performing very well.” He further noted that parcelling multiple cargo types for its customers on each sailing which allows AAL to offer significant economies of scale to every shipper, both large and small.

Schoeller further stressed that AAL, despite the proliferation of container cargoes in the multipurpose shipping sector, have continued to prioritise its existing multipurpose and project heavy lift shippers.

The tower components were transported on behalf of global logistics provider Geodis Freight Forwarding and will form part of a vacuum distillation unit (VDU) at a US petroleum refinery. The unit produces several types of gas oil that are heavier than middle distillates such as jet fuel, kerosene, and diesel. These distillates can be further refined to make products such as light-cycle oil, gasoline, and naphtha.

Yahaya Sanusi, deputy head of AAL Transport Engineering, added that the length of the cargo presented AAL with very tight clearance between the cranes, so meticulous modelling and simulations were undertaken to ensure the success of the lifting and stowage operations.