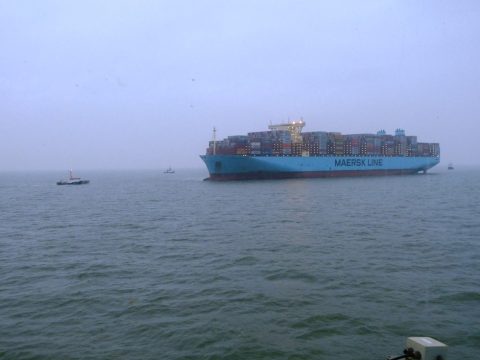 Mumbai Maersk runs aground outside Bremerhaven

Two multipurpose vessels have come to the aid of Mumbai Maersk, one of the world’s largest containerships that ran aground outside Bremerhaven, Germany. Global shipping giant Maersk said that the incident happened around 23:00 CET on February 2.

In 2018, Mumbai Maersk, part of Maersk’s’s Triple-E fleet became the first vessel to break the 19,000 TEU mark when it loaded 19,038 TEU, setting the world record at the time for the highest-ever load for a single containership. The feat was achieved at the Tanjung Pelepas Port in Malaysia.

However, on its trip from Rotterdam to Bremerhaven the vessel ran aground off the German island of Wangerooge in the North Sea. Germany’s Central Command for Maritime Emergencies further noted that multipurpose vessels Neuwerk and Mellum as well as another five tugboats were sent to the scene of the accident. In the early morning hours a first attempt to pull the ship into the deeper fairway was unsuccessful. To avoid confusion with the MPP/general cargo vessels, the multipurpose vessels Mellum and Neuwerk are used as buoy tenders and for the maintenance of navigation signs, for pollution control, firefighting, for assistance at sea, especially emergency towing as it was in this case, and as an icebreaker and for maritime police tasks.

If you are having flashes of the the Ever Given blocking the Suez Canal, fear not as Maersk informed that all crew are safe, there is no pollution and no sign of hull breach, and that the vessel is on a ground on a shallow patch with the entrance to the port remaining unobstructed. This means that this incident is unlikely to cause global congestion issues that resulted from the grounding of the Ever Given.

We can confirm that on 2 February at around 23:00CET, Mumbai Maersk ran aground outside Bremerhaven, Germany. All crew are safe, there is no pollution and no sign of hull breach. The vessel is on ground on a shallow patch and the entrance to the port is not obstructed.

The shipping giant also noted that all the affected customers are being informed of the incident.

CCME further noted that planning for a further towing attempt is being intensified and details of the operation are being worked on. An on-scene coordinator from the emergency command is on site, while Maersk has already signed a contract with a salvage company. Maersk noted that extra tugs are being deployed and a new attempt to free Mumbai Maersk is expected later today when water levels are expected to be optimal.

According to the tidal charts, the next high tide is at 15:06, today, Thursday 3, with the next high tide at 03:17 in the morning of Friday, February 4. Speaking to Reuters, a CCME spokesperson said that the attempt to tow the vessel free in the afternoon has been abandoned as the tide level is not high enough and a new attempt will be started around midnight.

In total, there are two additional high tides within the 40-hour window since the vessel ran aground which can help with the salvage operation.