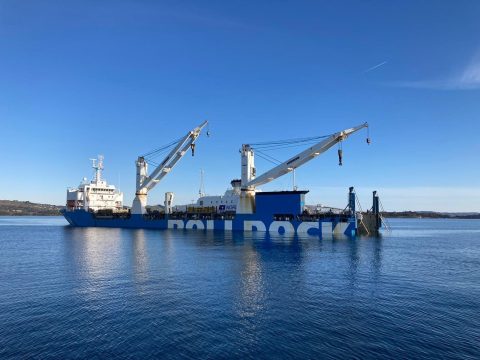 Roll Group said in a brief statement that RollDock Stork finished discharging the ferry in Stavanger, Norway. Shipping data shows the operation was completed in the latter part of April.

To remind, RollDock Storm departed Singapore mid-March with its cargo. Built by FSG in Flensburg, Germany, the RollDock Storm and its sister vessel RollDock Star have the same loading modes as the S-Class. With their length of 151.5 meters, the ST-Class vessels have a wider and longer cargo hold which creates a larger deadweight and greater accommodation area.

The Roll on/Roll off Ferry

Sembcorp Marine was awarded a contract by Norled to design and construct three identical battery-powered Ropax ferries, based on the proprietary design of LMG Marin, a wholly-owned subsidiary of Sembcorp Marine.

The vessels’ design is optimised according to Norled operational requirements incorporating energy-efficient solutions throughout the ferries. These include quick-connection shore charging plugs; auto-mooring; auto-cross; efficient hull, propulsion and heat recovery systems; as well as minimised hotel and auxiliary loads.

The vessels will operate normally on zero-emission, powered by lithium-ion batteries at a service speed of 10 knots. When required, they can run on combined battery-diesel hybrid backup modes. The batteries will be charged and recharged using green hydro-electric power.

The design of the 82.4-metre long multi-deck, double-ended ferries, each with a capacity for 300 passengers and crew, as well as 80 cars or a combination of up to 10 cars and 10 trailer trucks, also took into consideration passengers’ comfort and working conditions for the crew.

When launched into operation for Norled’s shortsea Hella-Vangsnes-Dragsvik connections in Norway, it is expected to fulfil Norled’s objective to contribute to emission reductions through the introduction of innovative new vessels equipped with zero-emission technology.

The remaining two Ropax ferries are expected to be ready in 2022.