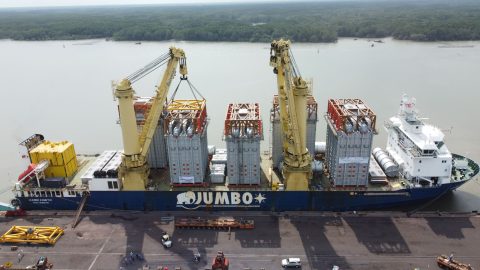 Jumbo Kinetic, the heavy lift vessel operating in the Jumbo-SAL-Alliance fleet, has continued the support of Mexico’s goal to reduce reliance on fuel imports from the United States. The vessel, according to the alliance, is currently on its way to the Dos Bocas refinery with more project cargo onboard.

Jumbo Kinetic loaded heavy equipment at in Phu My, Vietnam. It is currently sailing in the Caribbean Sea, off Mexico, entering the Gulf of Mexico, according to the vessel’s AIS data.

The large units include radiant modules measuring about 18.4 x 13.4 x 24.0 metres with the heaviest weighing in at 480 tonnes. The radiant modules together with the convection and stack modules form part of a fired heater in the refinery. There are very few heavy lift vessels in the world that can lift these types of modules due to the required lifting heights.

The jigsaw puzzle of cargo was pieced together over the course of a few days where first the below deck area was filled with the smaller cargoes, then the hatches were closed up, and the heavy modules were carefully loaded on deck using single crane lifts. The lifting plans for the stacks resulted in faster loading and less risk or damage to the cargo and by using uplift clips and stoppers to seafasten the cargo, saving the client time and resources there too.

Once completed, Mexico’s largest refinery will have a total output of 340,000 barrels per day (bpd) and be capable of producing 170,000 bpd of petrol and 120,000 bpd of ultra-low sulphur diesel. The facility is owned and operated by the state-owned oil and gas company Petroleos Mexicanos (Pemex).