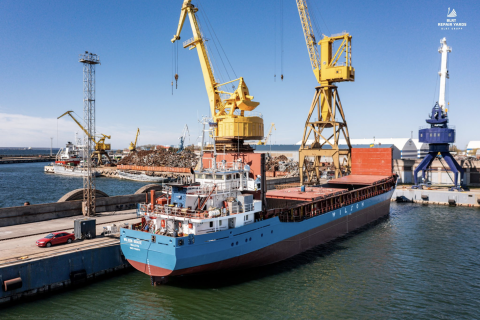 In the last 6 months, three Wilson ships were repaired at the Tallinn Shipyard (TSY) in Northern Estonia, one of the three BLRT Group owned repair yards in the Baltic Sea.

In mid-January 2022, the Wilson Brugge, a 25 year old general cargo and container ship with a gross tonnage of 2446t, received treatment to its hull and cargo holds. The main engine, propulsion complex, rudder and hatch covers were inspected and repaired. This work was carried out by yard specialists, in the scope of a class renewal.

The TSY conversion and modernization team also installed a new ballast water treatment system (BWTS) onboard the Wilson Brugge, in line with the International Maritime Organisation’s 2017 Ballast Water Management Convention, aimed at stopping the spread of invasive aquatic species. Indeed, all ships concerned by the Convention must meet higher (D2) standards by 2024.

This marks the seventh instance of the Wilson Brake being repaired at TSY in 15 years. In addition to the BWTS, the Wilson Brake received hull and cargo holds cleaning, main engine and auxiliary mechanisms overhaul, as well as hull structures replacements.

The repair of the Wilson Brugge, Rotterdam and Brake, mark the continuation of 25 years of partnership between Wilson Ship Management and BLRT Group, over the course of which more than a hundred Wilson ships have been repaired.