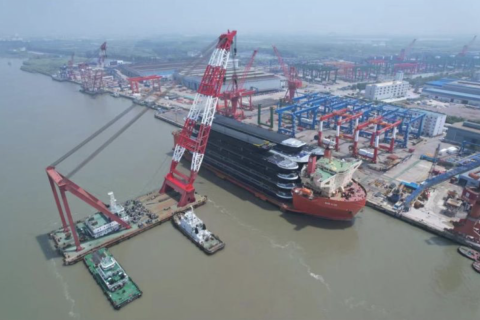 Shipbuilder and broker, RensenDriessen, is currently shipping 13 inland shipping hulls to the Netherlands, from the Chinese port of Nantong, in southeastern Jiangsu province.

The Zwijndrecht-based company manages the transportation itself. The complex loading was done under the supervision of RensenDriessen, says company owner and director, Wim Driessen. “Such transport happens more often. But it remains a huge job that requires months of preparation.”

The ship left for Rotterdam today, Wednesday 8 June, 2022. “There is a lot involved in such a transport. The engineering is really a job. There are many eyes watching. It takes months of calculation and submission to many parties.”

The current transport includes four stainless steel tankers, two chemical tankers, a RiverDrone and a barge for Veerhaven, on the Nieuwe Maas. The ships were built at the four partner shipyards with which RensenDriessen collaborates. The hulls are then sent to the Netherlands, Belgium and Germany. In the next six months, RensenDriessen will ship two more loads with hulls.

“We have a construction supervision team of 10 people on site,” says Wim Driessen. “The quality of Chinese hull construction is now almost comparable to that in Eastern Europe. The steel price is a lot more interesting, because the steel is produced locally in China.”

Driessen understands the tendency of the Netherlands Maritime Technology trade association to look critically at Chinese shipbuilders, but adds: “Just don’t forget that the high-quality finishing of all those hulls often takes place in the Netherlands.”