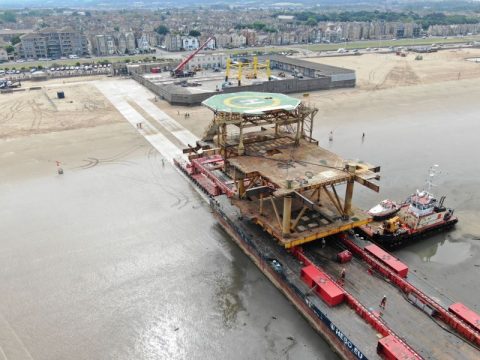 Mammoet transports the Seemonster to England

A decommissioned North Sea oil platform was brought by Mammoet to Weston-super-Mare, about 30km east of Bristol, England in the United Kingdom (UK). The platform, named the Seemonster, will be repurposed into the UK’s largest public art installation. It is scheduled to open in late August.⁠

The 450-tonne oil-rig platform was brought from the Netherlands by the Dutch company Mammoet, on a HEBO P41 flat-top pontoon, measuring 75 metres by 17,54 metres, and a gross tonnage of 1335 tonnes. Upon its arrival in Weston-super-Mare yesterday, the Seemonster was transferred onto Self-Propelled Modular Transporters (SPTMs), and brought to its new home, The Tropicana.

This installation project was designed by the UK-based creative studio, Newsubstance, as part of Unboxed2022, an event taking place from March to October 2022, presenting 10 original creative projects. It is funded and supported by the four UK governments, England, Northern Ireland, Scotland, and Wales, and is co-commissioned with Belfast City Council, Creative Wales and EventScotland.

The Seemonster will be lifted by crane, over the seawall and onto pre-constructed legs. In total it will measure 35 metres, with four publicly-accessible levels. Once finished, the installation will also feature a waterfall, a 6,000-piece kinetic installation resembling a monster’s shimmering scales, a seated amphitheatre and broadcast studio, as well as an oasis of nature, with plants selected to thrive in a seaside climate.