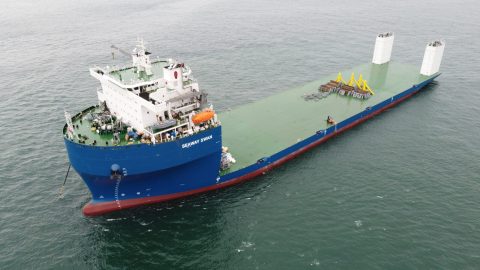 The Norwegian company Seaway 7, which has been active in the offshore Renewables Energy industry since 2009, has received a new semi-submersible heavy transport vessel, the Seaway Swan, which will be used for their work in offshore wind.

The Seaway Swan, which sails under the Norwegian flag, has a length of 218 metres, a beam of 43 metres, and a gross tonnage of 39 888 metric tonnes. This 50,000 Te DWT Heavy Transport Vessel (HTV) has an open stern and large, unobstructed deck. Thanks to its Dynamic Positioning capabilities, this vessel is suitable for float-over operations, feeder duties alongside installation vessels, and offshore subsea construction support.

The Seaway Swan was built this year, by Qingdao Beihai shipyard, which is a part of the CSSC group. Seaway7 has a bareboat contract with United Faith for this new-build vessel. It was originally called the MV Xin Qun 3 but was renamed Seaway Swan by Seaway7.

Sea trials were successfully completed at the beginning of April without a hitch. The Seaway Swan’s maiden voyage will take place in September. The ship will carry four large Ship-to-Ship cranes from Qingdao, China, to Alexandria, Egypt.