In its latest edition of BigNews, BigLift Shipping noted that together with its sister company Spliethoff it is involved in the worldwide transport of monopiles, transition pieces, jackets, topsides, HVDC stations, nacelles, towers and blades for many on- and offshore wind projects.

Spliethoff P8- and P14-type vessels and the BigLift Happy R-type vessels are working in harmony on a number of projects, one of them being the two recent shipments of wind equipment for Vestas, where BigLift Shipping’s HTV BigLift Barentsz transported 87 V150 Blades on deck for account of Spliethoff. The huge package of blades was loaded in Motril in Spain and was destined for Germany and Sweden. Furthermore, m.v. Happy Buccaneer transported 21 V162 Blades from Motril to Antwerp.

During the months prior to the vessel’s arrival, all the project documentation had been prepared in the office. One of the issues under scrutiny was the loading operation at the port of Laem Chabang, for which a detailed ballast plan had been developed to deal with the weight of the topside and the tide cycle. After her arrival, the vessel was ballasted to the sea transportation mimic condition for grillage installation. In this condition the vessel’s deflection is similar to that during sea transportation. Deck markings were set out and the lower grillage was installed.

While the vessel was alongside, daily Operations meetings and HSE meetings were held on site with BigLift’s client Aibel and end client Equinor. Before Dogger Bank A was driven on board, vessel had to perform a ballast test showing that all pumps of the vessel were working well. During the loading operation dedicated pumps were used for weight compensation and tide compensation.

The Dogger Bank A topside was loaded on May 12, and in the following days the topside seafastenings were installed, which took till May 15 to complete. After approval of the final checks, the vessel sailed away on the afternoon of May 16. HTV BigLift Baffin arrived in Haugesund, Norway on June 26.

Further to the shipment of Haliade 150 nacelles for the Saint-Nazaire offshore wind project earlier this year, BigLift has recently performed several voyages with offshore windmill towers for GE for the same project.

In Sevilla, Aveiro and Bilbao, several Spliethoff P8 and P14-type vessels loaded full and complete cargoes of Haliade 150 windmill towers to be discharged in Saint-Nazaire.

In an ongoing programme to ship onshore wind turbines into the Great Lakes, BigLift has been moving various projects with their Happy R-type vessels.

To mention a couple of the most recent projects, the Happy R-type vessels were instrumental in sailing four voyages of windmill blades, two from Tuticorin to Ogdensburg, NY for account of GE and two more for Vestas from Altamira to Bay City, MI and Erie, PA.

The BigLift Happy R-type vessels, with their unique combination of hold configuration and crane capacity, have an unrivalled intake of windmill blades and windmill towers.

Newbuild vessels Brouwersgracht and Bloemgracht, which will be delivered later this year,  are well suited to support the offshore wind contractors in their installation of offshore wind projects. The vessels are ideally equipped for the transportation and installation of transition pieces and secondary equipment.

Brouwersgracht and Bloemgracht will avail over a DP2 dynamic positioning system so that they will be able to stay in exactly the required location in the field, up to Beaufort 6. Added to that, they will have SPS 60 notation, enabling them to house 60 on board in their regular accommodation.

Furthermore, two Huisman HL mast cranes with a lifting capacity of 500 mt each and a large open hold makes them very flexible in the possibilities for hold and deck layout for specific project requirements. 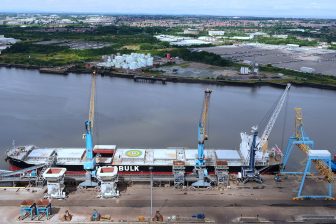 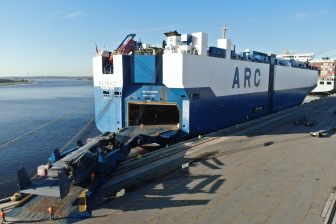 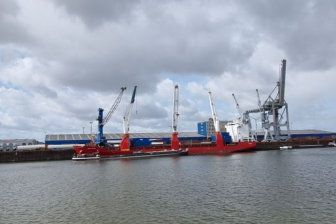 BOCS and UAL pick AAA as liner agency in Antwerp