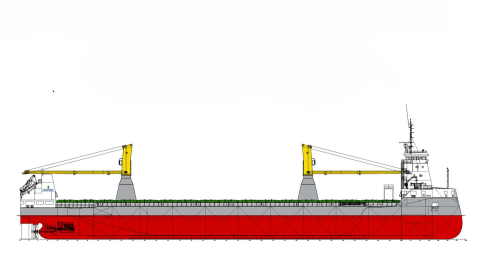 Ferus Smit Shipyards has been tagged to build two new project cargo vessels for the Groningen-based ForestWave Navigation. The vessels will be the Ecobox XL type with the design suited for extra-long items, such as windmill blades.

ForestWave noted that the vessels will still keep their capabilities as regular general cargo vessels, with 12,500 dwt loading capacity. The vessels will feature box shaped single hold including complete movable tweendeck, resulting in large space for project cargo, up to 112 metres in length on tweendecks. It will also feature two 85-ton cargo cranes. Delivery of the two vessels is scheduled for 2024 and 2025.

According to ForestWave, the design is such that it further enhances her excellent ‘green’ performance with a reduction of her EEDI-score to a new class reference standard. Vessels swill feature a green passport, Tier III, 3.300 kW main engine, ORC waste heat generator integrated in the propulsion system for further reduction of fuel consumption and ultra-low EEDI, and the Ferus Smit bulbless Canoe type bow, designed to reduce fuel costs and better sustained speed in harsh weather and sea conditions.

ForrestWave Navigation Group has been on a rapid growth path since 2011, only seven years after it was founded. Currently, the company operates 35 MPP vessels in the range of 6,000 to 12,500 DWT. The two Ecobox XL
vessels are the first orders they placed with Ferus Smit and both parties are convinced this will lead to a
successful collaboration for the years to come.

ForestWave has also recently expanded its fleet with the takeover of FWN Atlantide at Marina di Carrara. The 2011-built vessel adds 10,872 dwt to the the company’s tonnage.