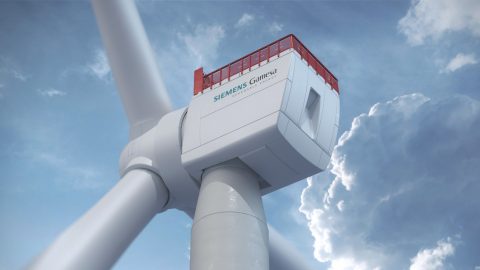 Siemens Gamesa has signed the first contracts for its new 14 MW offshore wind turbine. Combined the orders have a capacity of 2,940 MW, some 210 units, with another 1,044 MW possibly in the pipeline.

The first contract has been signed with Hai Long Offshore Wind (Hai Long), which will use the mega turbine at the upcoming 300 MW Hai Long 2 project in Taiwan. Talks to use the turbine for the rest of the 1,044 MW Hai Long pipeline as well are ongoing.

The exact number of units for this project remains to be confirmed due to site-specific conditions, but Siemens Gamesa says the first 300 MW will serve as an anchor to expand its local footprint in Taiwan.

Siemens Gamesa is currently building a nacelle assembly facility in Taichung. The manufacturer now plans to expand this facility to become a regional offshore wind nacelle industrial hub in cooperation with Taiwan-based suppliers. The nacelles for the new 14 MW wind turbine will also be built here.

The nacelle assembly facility will start production in 2021 to deliver nacelles to Orsted’s Greater Changhua 1&2a offshore wind power project. Once the nacelle assembly work is completed in 2022, the Taichung factory expansion will start. It will include doubling the plot area to over 60,000 m2, as well as at least doubling the number of Siemens Gamesa employees working in the factory.

The second contract was signed with Dominion Energy for the massive 2,640 MW Dominion Energy Coastal Virginia Offshore Wind (CVOW) commercial project. The exact quantity of turbines to be deployed is subject to final project site conditions, but all turbine installations are expected to be completed by 2026.

The development of the so-called SG14-222 DD offshore wind turbine was announced last week. It provides a capacity leap of more than 25% in comparison with Siemens Gamesa’s current largest offshore wind turbine, the SG11-200 DD, which has an 11 MW power output. Although the turbine is rated for a 14 MW power output, Siemens Gamesa says it can reach 15 MW in combination with the company’s Power Boost system.

The turbine will have a rotor diameter of 222 metres and 108-metre long blades. That is slightly bigger than GE’s 12 MW Haliade-X, which has a diameter of 218.2 metres and comes with 107-metre long blades. The Haliade-X currently is the largest offshore wind turbine in the world.
Although the Haliade-X is currently rated for 12 MW, it will not necessarily be overtaken by the SG14-222 when it hits the market in 2024. GE’s official rating for the Haliade-X is 12-14 MW so the turbines might end up having the same power output by the time Siemens Gamesa starts commercial production.