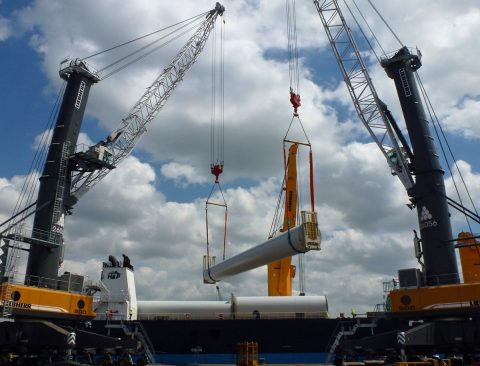 Liebherr’s Sycratronic system allows to operate two cranes as one

Crane manufacturer Liebherr has developed a system that allows crane drivers to operate two cranes as one. It’s similar to platooning in transport, but unlike the follower trucks, the follower crane does not just simply follow its leader. It can calculate what to do to compensate or correct a certain tandem lift move.

Using a Controller Area network (CAN bus), the Sycratronic system connects two cranes and enables their central processing units (CPU) to communicate with each other. This allows the leader crane to provide input like the slewing angle, hoisting height and the weight on the hook to the follower crane.

Theoretically, this means that one crane driver can operate both cranes simultaneously. “In practice, however, this may sometimes not be allowed for insurance reasons”, says Liebherr’s product manager for port equipment, Sebastian Simon. “Still, the system brings a lot of benefits”, he adds.

The biggest benefits are improved efficiency and increased safety. The Sycratronic system allows the operator to use the crane’s full capacity, while this is normally restricted to 75% in tandem operation. “This alone is a huge advantage, as it basically increases the usable lift capacity of each crane by 25%”, says Simon.

Another gain is the deployment of crane drivers. “While insurance policies often prohibit the follower crane from being unmanned, companies can man these cranes with rookies, allowing them to use their experienced crane drivers more efficiently”, says Simon.

The system also massively increases safety, says Simon. “The Sycratronic system monitors possible shifts of the centre of gravity of the load and can correct this automatically to ensure the best stability”, he explains. “However, the biggest advantage is the elimination of communication errors between two human crane operators, which is one of the main causes of accidents.”

While the system is developed to improve crane operations in all heavy-lift sectors, it could, in particular, prove useful in the (offshore) wind industry where long components and tandem lift operations have become the norm.

Speaking at PCJ’s Project Cargo Summit earlier this month, which was fully dedicated to the offshore wind industry, Simon said there is a growing appetite for mid-sized and heavy harbour cranes like the LHM420 and LHM800, which can lift up to 124 and 308 tonnes respectively.

With the Sycratronic system improving the safety of tandem operations, this makes it easier for terminal operators to scale up their lift capacities to over 600 tonnes when combining two LHM800 cranes. Simon did also mention that the increasing size of components might spur the development of even bigger mobile harbour cranes, but for now, the company focuses on automation, electrification and digitalization, which the Sycratronic system is the result of.

If it will be allowed to be operated by just one crane driver in the future remains uncertain. It might when industrial autonomous technology matures further and becomes more accepted. For Liebherr, though, just the efficiency and safety gains are worth it. “We use the Sycratronic system for all the heavy-lift tandem crane operations at our factory”, Simon says.

It is possible to retrofit the system to existing cranes to bring the benefits of Sycratronic to already installed Liebherr mobile harbour cranes. 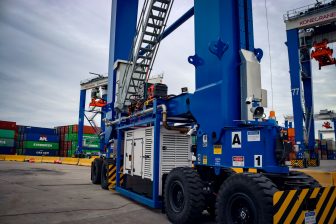 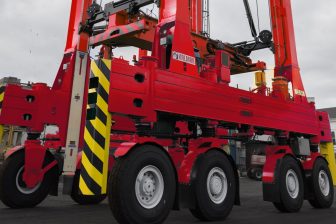