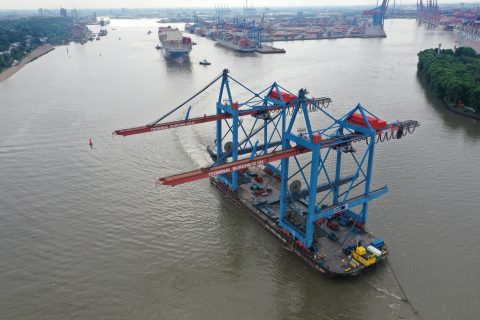 The two container gantry cranes that finished their service at the HHLA Container Terminal Burchardkai in Hamburg, Germany have left for Tallin, Estonia.

Both container gantry cranes were in operation at Burchardkai for 16 years. When they commenced operating in 2005, they were among the largest container handling cranes at the Port of Hamburg.

However, the increase in ship sizes in recent years made larger gantry cranes a necessity. Because of this, HHLA put into service a total of five new container gantry cranes for handling ultra large container vessels with a cargo volume of 23,000 standard containers (TEU) and more at Burchardkai back in 2019 and 2020.

They replaced five smaller units, three of which were dismantled in 2020. The two remaining cranes from Kocks will be used at HHLA TK Estonia to handle Baltic Sea traffic. They will make it possible for container vessels with a cargo volume of 14,000 TEU to be handled in Estonia.

Riia Sillave, Managing Director of HHLA TK Estonia: “The additional cranes from Hamburg are a huge step towards expanding the handling capacity at our terminal. In future, we will no longer have three but five container gantry cranes to handle ships. It is another important milestone in the further development of our terminal into a key Baltic hub within the port network of HHLA.”

The preparations for the challenging transport of the cranes started in the previous year. As part of this, a 35-metre-wide gate was built into the flood protection wall at the Burchardkai terminal in order to be able to move the cranes – each of which weighs 1,400 tonnes – from the quayside to the transport barge, which measures 122 x 36.5 metres.

The specialised Belgian company Sarens received the order for the transshipment and transport of the container gantry cranes to Estonia. The barge’s position was adjusted in relation to the height of the quayside using high-performance pumps.

The loading process itself was carried out with the help of a special transport platform which has 92 axles and 184 wheels, and the cranes were turned 180 degrees before the transshipment.

The journey will lead around the Skagen Odde peninsula, past Copenhagen and Malmö, and then on to Estonia. It is expected to arrive at the terminal in Muuga, near Tallinn, on July 9.

The cranes will be customized after arrival and are expected to commence operations by the end of the year.

Even before the transshipment, container gantry crane operators and technicians of HHLA TK Estonia were trained by their Hamburg-based colleagues so that they will be ready to begin operations once the cranes are set up.

In 2018, HHLA acquired the Estonian multi-function terminal near Tallinn and integrated it into its port network. The Port of Muuga is the main cargo hub in Estonia and an important maritime location in the Baltic region.

HHLA TK Estonia is market leader in container handling in the Baltic country and additionally operates a multipurpose terminal for break bulk, bulk and RoRo services.