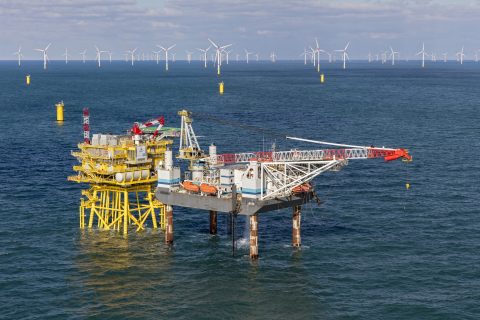 Jack-Up Barge has signed a new contract with Van Oord to aid the Dutch offshore contractor in the construction of the offshore wind farm Deutsche Bucht.

As part of the “Balance of plant” contract, Jack-Up Barge will provide Van Oord with its self-elevating platform JB-115, which can accommodate up to 100 employees and has a lift capacity of 300 tonnes. The Sliedrecht-based company will also provide internet and catering services for the crew.

The offshore wind farm Deutsche Bucht is located 95 kilometres northeast of the German island Borkum. The wind farm is scheduled to be completely operational at the end of the year and consists of 31 wind turbines of 8 MW each. When finished, the wind farm will create enough power to provide 178,000 households with electricity.

Van Oord was contracted for the design, engineering, procurement, construction and installation of the turbine foundations, the inter-array cables and the offshore transformer, as well as the transport of the turbines.

The JB-115 just returned from a contract at Kriegers Flak, where it aided a similar project. “After its return, we’ve made some special adjustments to ready the platform,” says Leander van den Berge of Jack-Up Barge. It is the fifth project the company carries out for Van Oord.

According to Van den Berge the existing relationship was an important reason for Van Oord to select Jack-Up Barge. “We have previously successfully worked together. Now we can build on that relationship because we’re flexible and competitively priced,” he says.