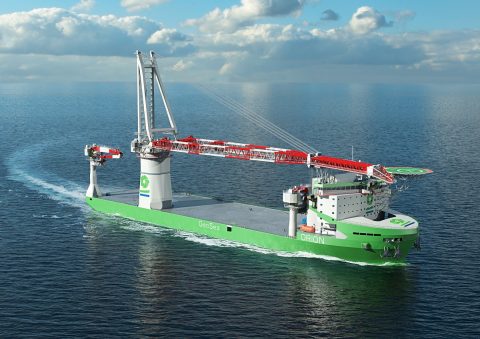 DEME Offshore has been awarded a major contract for the transport and installation of 165 foundations and turbines at Ørsted’s Hornsea Two offshore wind farm in the UK.

The 1.4 GW Hornsea Two offshore wind farm is located approximately 89 km off the Yorkshire coast and will meet the electricity needs of over 1.3 million homes per year. The wind farm borders the northern and western edge of the Hornsea One wind farm, where DEME was already involved in the foundations, turbines and export cable works.

The contract for Hornsea Two comprises the transport and installation of 165 monopile foundations and as well carrying out scour protection. DEME will instal the monopiles and transition pieces with its new DP3 offshore installation vessel ‘Orion’, which will enter the fleet by the end of the year. According to the Belgian offshore contractor, the new flagship features an “unrivalled combination of exceptionally high transport and load capacity”, as well as a crane with a 5,000 tonnes lifting capacity.

In addition to the transport and installation of the foundations, DEME will also install the 165 Siemens Gamesa 8.4 MW turbines at the wind farm. The turbine installation will be carried out with offshore installation vessels ‘Sea Challenger’ and ‘Sea Installer’ and is scheduled to be completed in early 2022.

The total contract value is over EUR 200 million.