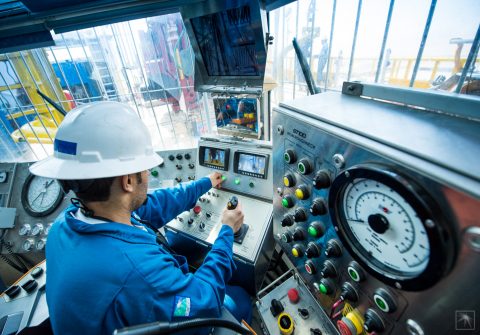 Offshore project sanctioning in the oil and gas industry has already surpassed the USD 50 billion mark in 2019, nearing the investment level of 2014.  “This is yet another signal that the offshore industry has turned a corner,” says Matthew Fitzsimmons, VP of Oilfield Service Research at Rystad Energy.

In total, new project investments could reach a value of USD123 billion this year, well beyond the investment level of USD 78 billion in 2014.

The current investment level of 50 billion is largely driven by Saudi Aramco, which recently announced $18 billion worth of project commitments associated with the Marjan and Berri expansion projects.

The Marjan Expansion alone is the largest field to be sanctioned globally since 2014, Fitzsimmons states. Later this year, the Hail and Ghasha Sour Gas projects, Lula’s Oeste FPSO in Brazil, and the feed gas systems to develop the Atum and Golfinho assets on the Area 1 LNG project are also expected to be sanctioned. Once that happens, four of the 10 largest offshore projects since 2014 will have been sanctioned during this calendar year.

Back in 2014, 74 offshore projects were sanctioned for nearly USD 78 billion. Total alone was responsible for $24 billion of these projects by growing their portfolios in West Africa and Brazil. However, after the oil prices dropped operators thought twice about sanctioning new work. That led to an enormous downturn with new project investments bottoming out in 2016, with only USD 37 billion of offshore projects sanctioned.

For the offshore industry to reach its full potential this year, a breakeven price of at least USD 40 per barrel is needed. That seems realistic as the oil price (Brent) has been above that mark for more than three years now. However, Rystad Energy cautioned that 13% of the potential USD 123 billion to be committed for offshore projects has a breakeven price over $60 per barrel, which leaves room for uncertainty.

The oil price has been hovering between USD 54 and USD 74 per barrel this year and currently stands at USD 64 per barrel. That means USD 16 billion worth of projects are at risk of not receiving funding at the time of their sanctioning decisions this year. But even without that amount, 2019 looks set to beat the investment levels of 2014.

Rystad Energy will present its outlook for the oil & gas industry, including expectations for EPC contractors and shipping companies, at the Project Cargo Summit. This two-day international conference about the transport of large and heavy cargoes is organised by Promedia Group on the 11th & 12th of September, 2019 in Rotterdam. Interested in attending this dedicated project cargo and heavy-lift event? Book your tickets now at www.projectcargosummit.com.