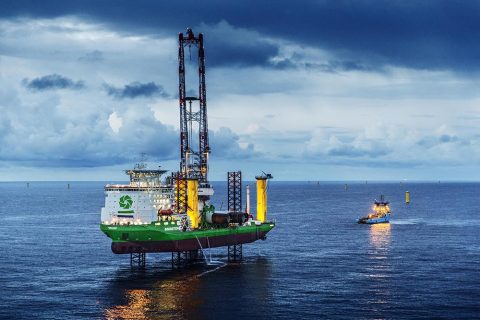 Belgian offshore contractor DEME has been awarded the EPCI contract for the first offshore wind farm in France. The contract will be executed in a consortium together with Eiffage Métal and comprises the design, fabrication and installation of 80 wind turbine foundations and has a total value of EUR 500 million.

The Saint-Nazaire wind farm is owned by EDF Renewables and Enbridge. It will be located between 12 and 20 kilometres offshore of the Guerande peninsula in Western France. When finished it will be able to generate 480 Megawatts of clean power, which is expected to be enough electricity to supply 20% of the Loire-Atlantique department‘s power.

Production of the foundations is planned to start next spring, while the installation is planned to kick-off early in 2021. The project will feature an innovative foundation solution with drilled monopiles which Jan Vandenbroeck, General Manager French Subsidiaries at DEME, calls “a new step forward in the offshore wind industry.”

Eiffage Métal says it is proud to contribute to the first offshore wind farm in France. “Already involved in this market in North Europe, where Eiffage Métal, through its subsidiary Smulders, has gathered lots of references for offshore wind farms in Belgium, Germany, United Kingdom and the Netherlands, our Group will now develop its know-how in French waters,” general manager Antoine Brésolin comments.