Offshore wind capacity may increase 15-fold and attract around USD 1 trillion of cumulative investment by 2040, the International Energy Agency (IEA) concludes in a new report about the future of the offshore wind market. Europe will be the centre of the development, but China might follow hot on the heels.

The global offshore wind market has accelerated since 2010 and grew by nearly 30% per year between 2010 and 2018. Currently, there are about 150 new offshore wind projects in active development worldwide. Europe, in particular, has fostered the technology’s development, led by the United Kingdom, Germany and Denmark, but China added more capacity than any other country in 2018.

IEA adds that an even more ambitious vision, in which policies drive a big increase in demand for clean hydrogen produced by offshore wind, could push European offshore wind capacity dramatically higher.

China is also set to become a major player but unlike in the onshore wind market, where the country is expected to become the dominant source by 2050 according to International Renewable Energy Agency (IRENA), it will not overtake Europe as the largest region just yet.

Measured in capacity per country, however, China is likely to have the largest offshore wind fleet of any country by 2025, overtaking the United Kingdom. China’s offshore wind capacity is set to rise from 4 gigawatts today to 110 gigawatts by 2040. Policies designed to meet global sustainable energy goals could push that even higher to above 170 gigawatts.

The United States has good offshore wind resources in the northeast of the country and near demand centres along the densely populated east coast. Floating foundations would expand the possibilities for harnessing wind resources off the west coast, but the countries potential falls far behind that of the EU and China. 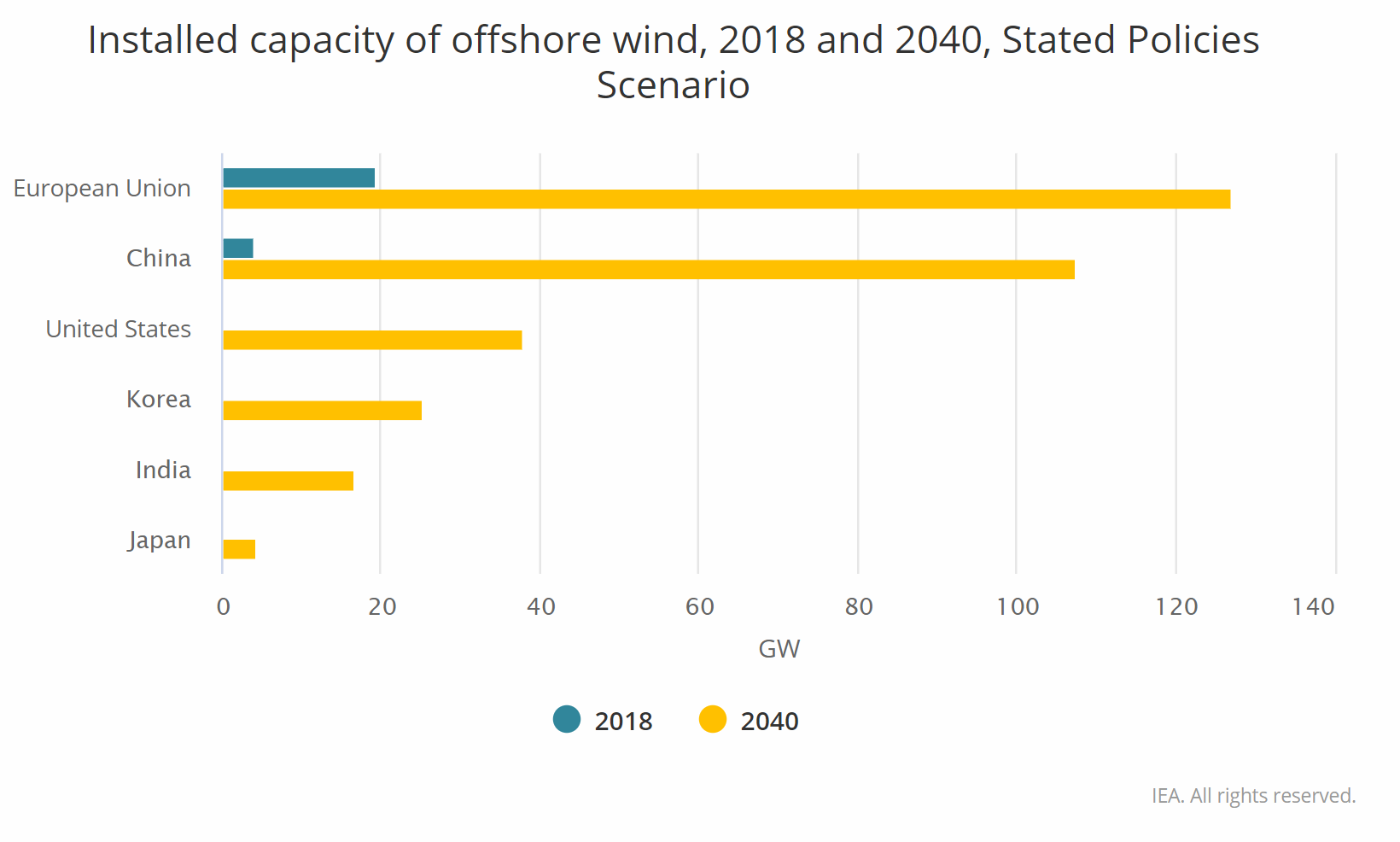 Even though the offshore wind market is developing rapidly, it is not even close to tapping the full potential, Fatih Birol, the executive director of the IEA, says.

“Offshore wind currently provides just 0.3% of global power generation, but its potential is vast”, Birol says. “More and more of that potential is coming within reach, but much work remains to be done by governments and industry for it to become a mainstay of clean energy transitions.”

According to the IEA, offshore wind has the potential to generate more than 420,000 TWh per year worldwide. This is more than 18 times the global electricity demand today.