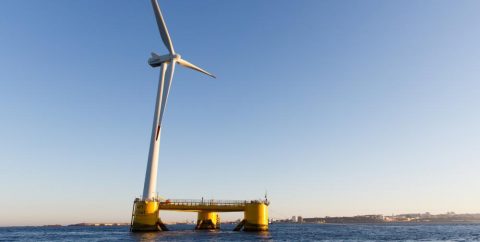 PRESS RELEASE – The first floating wind tower of the Windfloat Atlantic project has left the port of Ferrol in northern Spain. It’s being transported to a location 20 kilometres off the coast of Viana do Castelo, where Europe’s first floating offshore wind farm will arise.

The Windfloat Atlantic project will have three wind turbines based on floating structures, which are only held by currents to the seabed, about 100 meters deep. Once installed and ready to go into operation, the three floating structures will be 30 meters high and 50 metres apart.

The structure is made up of a floating platform on which a wind tower rests, the largest installed on such a surface to date. In the coming months, the two other platforms will also be transported to their final location to complete the wind farm, which will have an installed capacity of 25MW, capable of producing enough electricity to supply about 60,000 homes per year.

Windfloat Atlantic is based on the success of the WindFloat1 prototype, which has been testing on the high seas from 2011 to 2016. The 2MW prototype was able to continuously generate renewable energy for five years, surviving extreme weather conditions that included waves of up to 17 meters and winds of 60 knots.

The floating wind farm Windfloat enables the production of deep-sea offshore wind power and has the benefit of not relying on the complex operations required to install traditional fixed-base structures in offshore wind farms. According to the owners, the floating wind towers can support the largest wind turbines available on the market of almost 9MW.

The project is supported by public and private institutions and partly funded by the Portuguese government, the European Commission and the European Investment Bank.