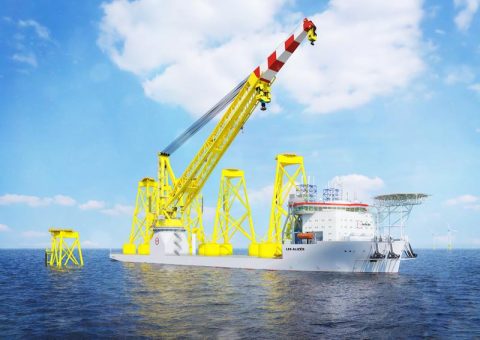 The ink on the newbuild contract for mega crane vessel Voltaire has hardly dried, while Jan de Nul has ordered another, even bigger crane vessel capable of lifting 5,000 tonnes. The new vessel is specifically designed to transport and install the foundations of the next-generation offshore wind turbines.

Just six months ago, Jan de Nul announced it had ordered a new crane vessel with “unrivalled” crane capacity. The Voltaire, as the vessel will be called, will boast a 3,000-tonne main crane. Impressive as it is, the Voltaire won’t be Jan de Nul’s largest crane vessel of long as the new ship, called Les Alizés, is a lot bigger in every aspect.

Although the vessel is suitable for the decommissioning of offshore oil and gas platforms as well, the mighty crane ship will mainly be used to install offshore wind turbine foundations. Thanks to her dimensions and impressive lifting and loading capacities, Les Alizés will be able to load out, transport and install multiple units of the largest and heaviest wind turbine foundations which can weigh up to 2,500 tonnes.

The vessel has been designed as a floating crane vessel to allow it to work in deeper waters as well. Like the Voltaire, the Les Alizés was ordered in response to the increasingly larger offshore wind turbines manufactured by GE and Siemens Gamesa, amongst others. These new mega wind turbines can be more than 270 meters high with blades up to 120 metres and turbines that weigh over 700 tonnes.

“We continue to invest in the future of offshore renewable energy. By ordering Les Alizés today, from 2022 we will have not one, but two, offshore installation vessels that will be able to install the newest generation of offshore wind farms. This is how we offer our customers the most efficient installation method”, Philippe Hutse, Offshore Director at Jan De Nul Group, says. 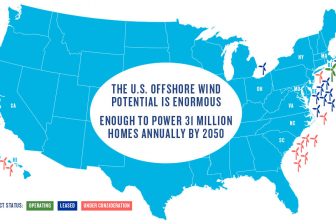