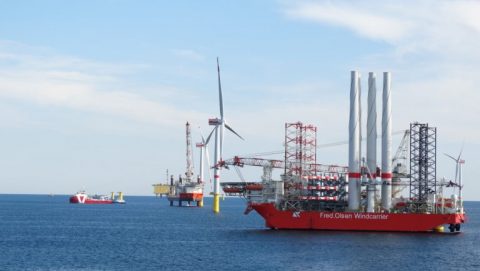 PRESS RELEASE – Fred. Olsen Windcarrier has been awarded a contract by EDF renewables (EDF) for the transport and installation of 54 8MW Siemens Gamesa wind turbines for the Neart na Goithe (NnG) offshore wind farm off the coast of Scotland.

The Neart na Goithe offshore wind farm is located 15.5 kilometres off the Fife coast east of Scotland on a site with large water depths. Once operational in 2023, it will be able to generate 450 MW of renewable energy to power over 375,000 households.

“This is our first direct contract with EDF and we are extremely pleased with this major contract award”, says Guillaume Bonnesoeur, Commercial Manager at Fred. Olsen Windcarrier.

In the UK, EDF Renewables is one of the leading renewable energy companies which develops, builds and operates generation projects with a focus on onshore and offshore wind as well as battery storage technology. The company already operates more than 965MW of wind farms and battery storage, of which 496 MW in Scotland, and has more than 2GW consented and in development. The company is part of of the French utility EDF.

“We are excited to get work underway with our contractors and all Scottish companies and stakeholders participating in the project. The 450 MW NnG project will play an important role in de-carbonising the UK electricity system and is a further example of EDF Renewables’ continuous investment and growth in Scotland”, comments Matthieu Hue, CEO at EDF Renewables.

Fred. Olsen Windcarrier will start construction in 2022 and will use Dundee as its load-out port.