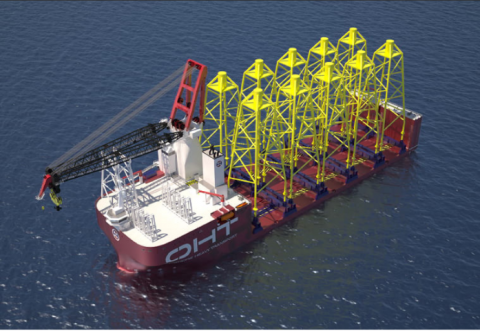 Offshore Heavy Transport (OHT) has won a large transport and installation contract for two of the three Dogger Bank offshore wind farms, each capable of delivering 1.2 GW of electric power. The contract will be carried out by OHT’s new semisubmersible heavy-lift vessel Alfa Lift, which is being built in China.

Under the agreement, OHT will carry out the transport and installation of monopile foundations and transition pieces for the Creyke Beck A and B wind farms. The installation for the third Dogger Bank wind farm, Teesside A, has not been awarded yet.

Utilising its innovative 51,250 dwt semisubmersible heavy-lift vessel Alfa Lift vessel, the foundations will be transported to the offshore site, approximately 130km off the north-east coast of England, and installed in water depths of up to 35 metres.

The Dogger Bank wind farms are being developed by SSE Renewables and Equinor and will be the largest offshore wind park worldwide.

“We are humbled and honoured to be selected as the preferred supplier for this momentous project, bringing the world’s largest and most capable offshore wind installation vessel to the world’s largest wind farm. We are focused on bringing significantly increased efficiencies to the market with our new vessel, contributing to the achievement of the lowest ever strike price”, says OHT CEO Torgeir Ramstad.

According to OHT, the Alfa Lift will set a new benchmark for efficiency in offshore wind turbine installation. The vessel will feature a 3,000-tonne and “unprecedented cargo-carrying capacity”; The total usable deck area exceeds 12,300 square metres and offers space for up to 10 1,500-tonne ultra-large jacket foundations or 11  2,000-tonne extralarge monopiles with transition pieces and mission equipment.

“We have one overriding goal with this initiative; to bring down the cost of building offshore wind farms”, said OHT’s CEO Torgeir E. Ramstad when the company announced the order for the Alfa Lift in July last year.

The ordering of the new vessel helped OHT to land the contract. “The monopiles that will be installed at Dogger Bank will be amongst the largest ever used on an offshore wind farm and we needed a vessel that would allow us to deliver our project in the safest and most efficient way. OHT’s Alfa Lift’s capability offers us this solution”, says Steve Wilson, project director of the Dogger Bank Wind Farms.

The Alfa Lift will be delivered in 2021. Transport and installation of the monopiles and transition pieces will start soon after its delivery and is planned to be carried out between 2022 and 2024.