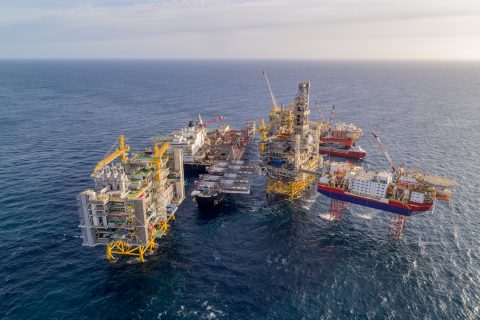 Aker BP has achieved its highest quarterly income yet, exceeding one billion dollars for the first time. Oil production increased by roughly 33% to a new record following the start-up of the Johan Sverdrup field.

Fourth-quarter 2019 marked the end of a year of strong progress and value creation for Aker BP, the company states. Aker BP reported a total income of USD 1,003 million for the fourth quarter of 2019, up more than 25% compared to the same period last year when total income amounted to USD 723 million.

Profit before taxes amounted to USD 424 million versus USD 143 million last year. Net profit came in at USD 112 million for the quarter.

All of Aker BP’s major field development projects progressed according to plan, with Johan Sverdrup and Valhall Flank West both delivering first oil.

The production from Phase 1 of the Johan Sverdrup development project started on 5 October, more than two months ahead of schedule and USD 4.4 billion below budget, the company states proudly.

“After only five weeks all the eight pre-drilled oil production wells were on stream and producing according to expectations at above 350 mboepd gross. The production efficiency was impressive at 99 percent including a planned emergency shutdown test”, writes Aker BP in its quarterly report.

Drilling of the next production well (no 9) started late in January 2020 from the fixed rig drilling platform, which will drill continuously for the next 3-4 years. It is expected that the Phase 1 gross oil production capacity of 440,000 bpd will be reached during the summer of 2020. Phase 2 of the Johan Sverdrup development is progressing well and was approximately 23 percent complete by the end of the fourth quarter.