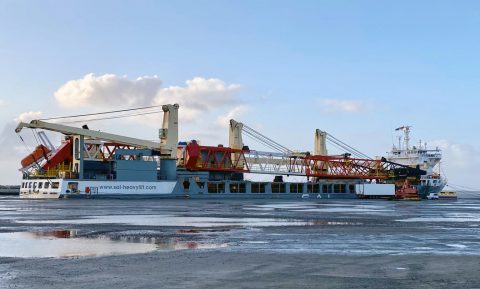 SAL’s heavy-lift vessel Wiebke arrived with the boom in the port of Esbjerg this weekend. Teams are onsite to offload the cargo once the weather conditions become favourable. As soon as the new crane boom is on the quayside, preparations for the installation onboard Pacific Osprey will start.

The Pacific Osprey is a 2012-built, self-elevating Windfarm Installation Vessel, originally fitted with a 1,200-tonne main crane which could lift the crane hook 97 metres above the deck at a radius of 31 metres. However, with the announcement of GE’s 12 MW Haliade-X wind turbine generator, that height is not sufficient anymore to install the future generation of wind farms. For that reason, the company decided to upgrade the vessels lift capabilities by replacing the current crane boom.

With its upgraded boom, the Pacific Osprey will be able to lift loads of 1,200 tonnes up to 132 meters above the deck at a radius of 31 metres. At a radius of 50 metres, it will be capable of lifting components weighing up 700 tonnes to a height of 128 metres above the deck.

“This is an important milestone for Swire Blue Ocean. The transportation of the crane boom to Denmark rewards months of hard work spent developing a new crane boom design with capacity for future wind turbines,” says Kim Tribler, Head of Marine Operations, at Swire Blue Ocean (SBO). The Pacific Osprey is expected to return to service in May this year.