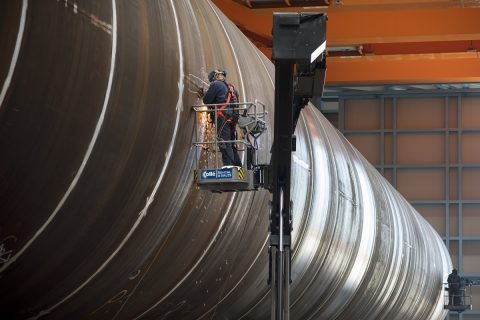 Dutch Sif Group has definitively cancelled the order for the delivery of the foundations for the first large American offshore wind farm, Vineyard, off the coast of Massachusetts.

This is evident from an explanation by CEO Fred van Beers on the group’s half-year figures. Last year it became clear that the client would not receive a permit for the time being because the US Department of the Interior wanted additional research into the environmental impact of the project. This specifically concerns the consequences of construction for the northern right whale, a once common but now almost extinct whale species.

Sif, which assembles the piles at its factory in the port of Rotterdam, saw the order as an important entry into the North American market, where the construction of offshore wind farms is still in its infancy. Heerema, also Dutch, would take care of the transport of the 84 foundation piles.

Van Beers says that the production of the piles planned for this spring could be partly offset by the start of production for wind farms in Japan and France and for “a number of smaller projects that were shelved as a result of Covid19”. In addition, the company worked on the completion of the Borssele 1-5 projects and the British wind farm Triton Knoll.

He further announced that Sif is in exclusive negotiation for two major new projects. For a project in the North Sea, 70,000 tons of steel would have to be supplied to foundation piles, for a project outside Europe 200,000 tons.

According to him, the construction of wind farms is now taking off again after a sharp dip last year. “Many countries have adjusted their ambitions for offshore wind upwards and tender activity is therefore high. We expect that the trend of European projects for the period 2021-2027 from drawing board to production will manifest itself in the second half of 2020”, said Van Beers.