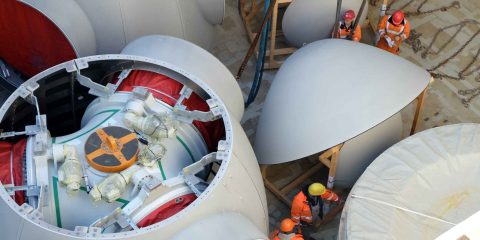 Japan has unveiled huge plans for offshore energy production. The country is gearing up to install as much as 45 gigawatts (GW) of offshore wind power by 2040, reports Reuters. The plans would make Japan a global leader in offshore wind.

Tokyo ultimate energy plan is to become carbon neutral by 2050 and the production of offshore wind energy will play a huge role to achieve this objective.

“It is important for the government to commit to the creation of an attractive domestic market and to stimulate investment from home and abroad,” industry minister Hiroshi Kajiyama told government officials and private companies, reports Reuters citing a statement from the ministry.

At the end of 2018, Tokyo adopted legislation to pave the way for offshore project development. At the time, eager companies expected the first larger commercial-scale projects to materialise within the next two years but no major projects have been approved since then.

According to Reuters, some industry players find the rules for investment and regulations too complicated. The government plans to be involved from the planning stages of projects and a demonstration project will be started next year, it said. Tokyo will also require equipment from domestic suppliers to account for 60% of a project.

In the past 12 months, several major European companies have forged alliances to benefit from Tokyo’s offshore wind ambitions. Van Oord and NYK teamed up at the start of this year, unveiling plans to jointly own and operate offshore wind installation vessels under the Japanese flag. With the collaboration, the companies want to leverage Van Oord’s expertise in offshore wind and NYK’s knowledge of the Japanese market. Japan is still very new to offshore wind and there is a lack of resources like experienced workers and specialised equipment.

Things are changing though. Japanese contractor Penta-Ocean Construction placed an order for a new offshore wind installation vessel with the PaxOcean Group in March. The vessel is of GustoMSC design, will be equipped with a 1,600-tonne main crane and is scheduled for completion in Q3 2022.

That same month, Penta-Ocean also announced a cooperation with Belgian offshore contractor Deme to jointly build offshore wind farms in Japanese waters. The companies said they will first develop new technologies to fight the elements and subsequently execute projects together. “Offshore wind projects in Japan can face very complex subsoils due to mixed sandy and rocky and sometimes soft grounds. In addition, severe meteorological conditions like typhoons, bomb cyclones and seismic forces need to be considered”, the partners said.

It’s not just on the installation side that companies are teaming. German shipbroker Global Renewables Shipbrokers in November last year announced it has teamed up with Coli Schiffahrt & Transport to target offshore renewable growth markets in Japan. With its long coastline and high wind speeds, Japan is in a very good position for establishing offshore wind projects on a large scale, GRS said at the time. With Coli, the broker has an experienced partner in the transport of breakbulk and project cargo, which the company says will help to create “fast and first-class project development of offshore wind farm projects in Japan.”