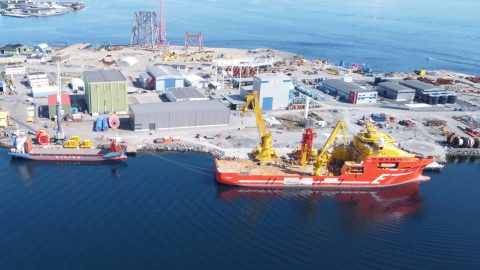 Havfram, formerly known as Ocean Installer is continuing the offshore installation works for Vår Energi’s Balder project. Havfram’s CSV Viking Neptun has been loaded with three multi-flow base (MFB) structures for installation at the Balder field.

Following successful operations in April and May this year to install the first two MFB structures on its Vår Energi Balder EPCI project, Havfram’s Balder project team transported a further three MFB’s from Agility Subsea Fabrication in Tonsberg to Stord.

The project cargo has been delivered by Jumbo-SAL-Alliance’s Fairmaster, one of the two vessels from the K-class family, fitted with two 1,500-ton crane with a combined lift capacity of 3,000 tons. The MFBs were then mobilised onboard CSV Viking Neptun for installation offshore.

Havfram, in partnership with Baker Hughes, a GE company, secured a contract in 2019 for the engineering, procurement, construction and installation (EPCI) of subsea systems and associated services for the Balder X project on the Norwegian Continental Shelf (NCS).