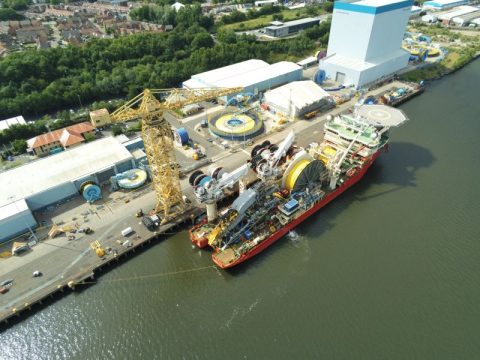 The Shepherd Offshore Technology Park, in Newcastle upon Tyne, England, has received two shipments this week. The cargo consisted of 21.7 kilometres of umbilical, and six reels. Two vessels conducted the deliveries: the Western Flex (NEP), and the Apache II (OTP), a pipe layer built in 2009, with a gross tonnage of 10692 tonnes.

The umbilical was loaded on behalf of the UK-domiciled global oil and gas company, TechnipFMC. It will be used for the offshore oil and gas field projects, named Evelyn and Abigail. The Evelyn oil and gas field, currently under development, is owned and operated by Tailwind Energy. It is located in the central North Sea, approximately 190km east of Aberdeen, Scotland. Operations are expected to begin in the fourth quarter of 2022. The Abigail oil and gas field is located 233km from Peterhead on the east coast of Scotland. Ithaca Energy, a subsidiary of Delek Group, will own and operate the project.

The reels were loaded on behalf of Bridon Bekaert, a company that specialises in steel wire, synthetic ropes and cords solutions. They are meant for the Shengsi No.2 Offshore Wind Power Project in Hangzhou Bay, Zhejiang, China. This 399.95MW offshore wind power project’s construction began in 2020 and it subsequently began operating in November 2021.

Both loadouts went as planned, and took place without any incidents on the quaysides. The Apache II  and the Western Flex then left Shepherd Offshore Technology Park in the early hours of the morning.