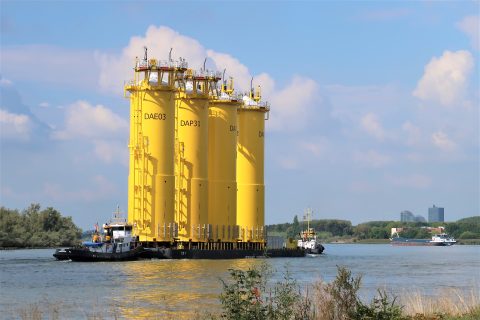 Four 550-tonne transition pieces for the Dogger Bank offshore wind farm (OWF) were spotted on the Oude Maas. They were leaving the Smulders yard in Hoboken, for the SIF factory on the Maasvlakte 2, when they were spotted near the village of Rhoon, in South Holland, on Sunday.

The SIF-Smulders consortium is supplying a total of 277 foundations for the Dogger Bank Wind Farm that is currently under construction off the east coast of Yorkshire, in the British North Sea. The 550-tonne transition pieces, which have a diameter of 8 metres, are being built by the Smulders yard in Hoboken.

Since April this year, they have been shipped in sets of four to the SIF factory on the Second Maasvlakte. From there, they go to sea. DEME, Jan de Nul Group and Van Oord are all involved in the offshore installation of the enormous wind farm, which is being built in three phases.

The transition pieces were placed on a Verbeke Shipping pontoon CS 1, pulled both by a Multratug 22, boasting 1100 horsepower and a 30-tonne bollard pull, and a Karin with 750 horsepower, chartered by Multratug. Such a formation is increasingly common for inland shipping between Antwerp South and Maasvlakte 2. 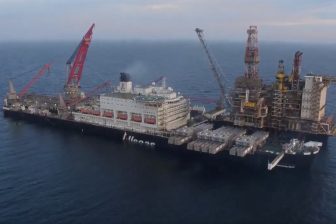 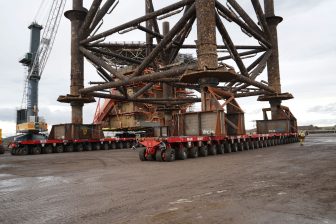