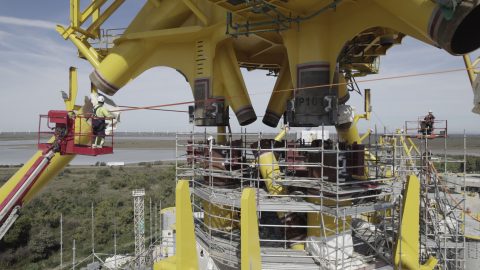 A milestone has been reached in EDF Renewables and Enbridge Éolien France Provence Grand Large project. The first transition piece has been installed on the floating foundation, for France’s first floating wind turbine project, at the Eiffage Métal’s site.

The transition piece is the connection between the floating foundation and the mast of the wind turbine. Smulders is producing the floating foundations for SBM Offshore, while the project is being carried out by EDF Renewables and Maple Power. Siemens-Gamesa, Prysmian and Réseau de Transport d’Electricité (RTE) will also be involved in the project. This 24MW floating OWF is located 16km off Port-Saint-Louis du Rhône, in the Golfe de Fos, and will be constituted of three floating turbines, and is set to enter service in 2023. The Crew Transfer Vessels, le Foselev Agate and Foselev Topaze will be used to service the project off the coast of the Provence-Alpes-Côte d’Azure region.

A simulation video of the SBM floating offshore wind turbine construction can be found here:

The electricity produced will be injected into the national electricity transmission network via a connection cable. RTE, which manages the French public electricity transmission network, is the contracting authority for the maritime and land-based electricity link between the offshore pilot plant and the existing Port-Saint-Louis-du-Rhône substation, and has entrusted SAS Provence Grand Large with the task of supplying and installing the land-based and maritime cables as part of a contract to delegate the contracting authority, a first in France. Once the line has been installed, RTE‘s mission is to take charge of the energy produced by the wind turbines and to transport it to the consumption areas on land for the duration of the turbines’ operation.

After a journey of approximately 19 km at sea, the submarine cable will reach land at Napoleon beach. It will then follow the existing road infrastructure for approximately 9 km. The cable will be completely buried, notably under the Napoleon road. It will then cross the Saint-Louis canal before arriving under an old industrial zone and connecting to the electrical substation at the exit of the town. The electrical link will be buried and therefore completely invisible. The connection to the Port-Saint-Louis-du-Rhône substation has the advantage of being the closest to the wind turbines, of being linked to the beach by existing roads and of having sufficient capacity. Furthermore, given the high electricity consumption of the area, all the energy produced will be consumed in the immediate vicinity. 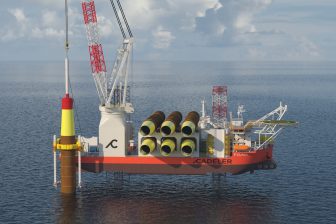 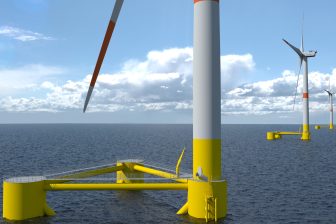 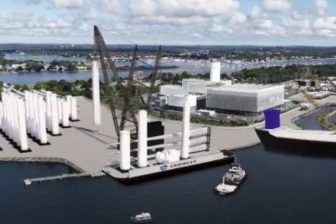