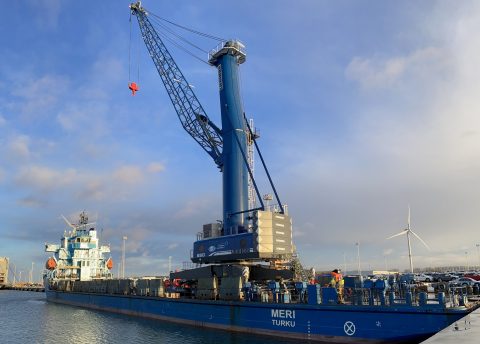 ICO, port handling and storage of roll-on/roll-off cargo expert a larger stake in the growing breakbulk and project market. The company has commissioned its new Liebherr LHM550 shore crane at its terminal in Zeebrugge.

With the lift capacity of 150 tons at 18 metres and 37 ton at 54 metres this new crane is the heaviest of its kind in Zeebrugge. The crane will be operating 100 percent fully electric with the power delivered by ICO’s own 11 wind turbines.

The company, a unit of Nippon Yusen Kaisha (NYK), is also looking to respond to a shift it is experiencing at ICO terminals. “There is a noticeable shift from traditional carriers (containers and conventional) to RoRo-operators. And this just puts ICO in a unique position,” ICO said in a statement.

All major RoRo-deepsea and shortsea carriers are currently calling ICO’s terminals and are offering their main deck space to breakbulk and project operators. Customers can therefore connect with some 140 deepsea and 50 shortsea ports through ICO’s congestion free terminal.

To remind, ICO has already handled major projects at its heavy duty terminals, most noticeably, transshipping about 50 super heavy modules and 285.000 tons of breakbulk destined for the Yamal LNG project in the Russia.

This has also prompted the company to extend its quay wall to 8.5 kilometres, and to add four extra berths as from spring 2022. All the berths have a 13.5 metre draft and can accommodate any type of vessel ranging from conventional ships to RoRo- and heavy lift vessels, barges and coasters.